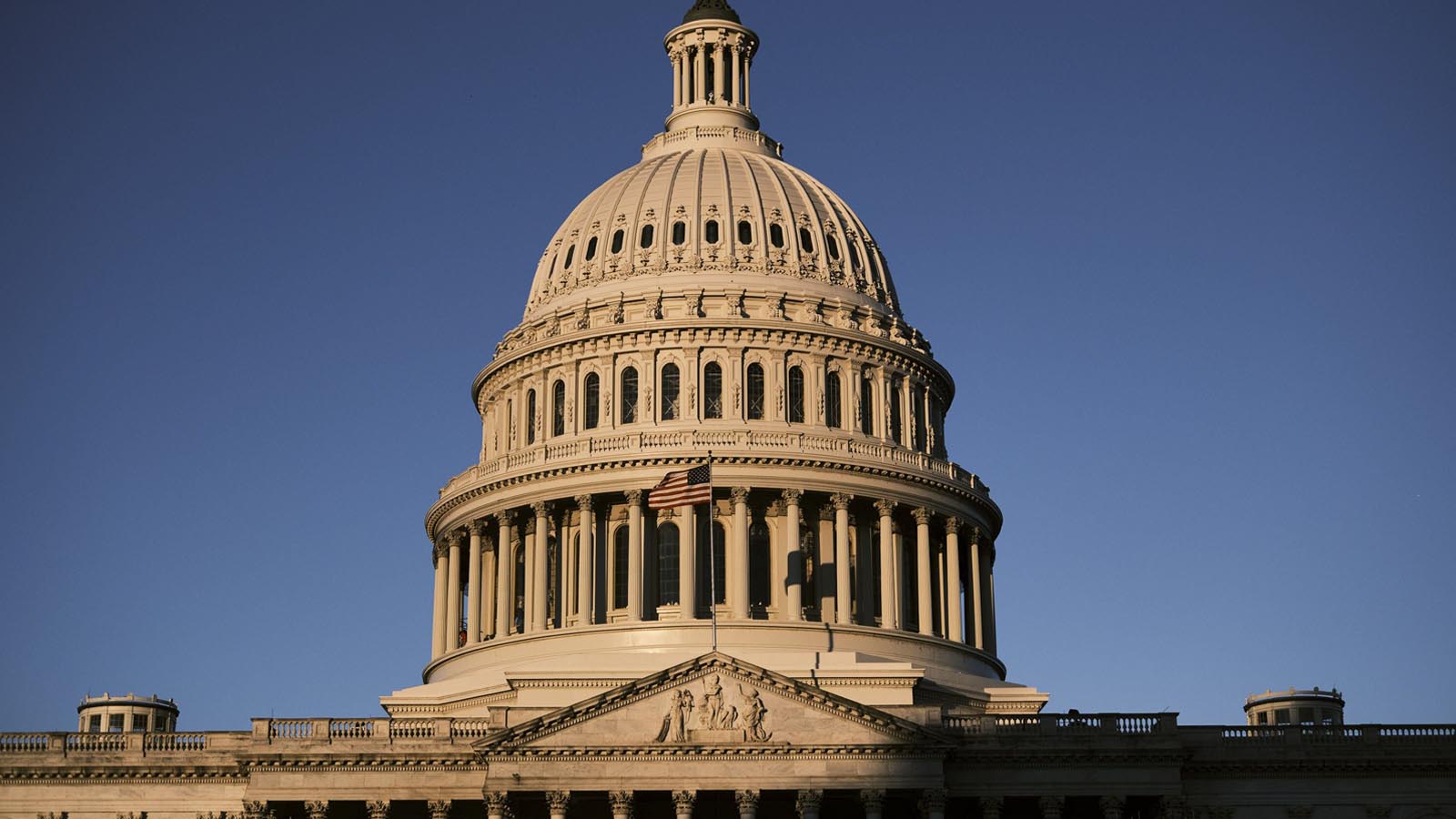 Twelve Senate Republicans voted with Democrats on Wednesday for the far-left “Respect for Marriage Act,” which is reportedly designed to provide federal protections for same-sex and interracial marriages.

Lawmakers voted for the measure 62-37 after a bipartisan group of senators made changes to the bill to include a clause about religious liberty. With the amendment agreed upon, the bill will go back to the House before going to President Joe Biden. The White House has expressed support for the measure. 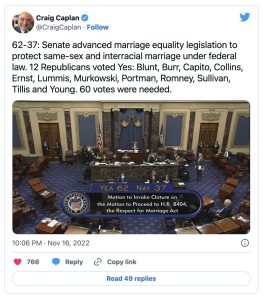 The Respect for Marriage Act (RFMA) was introduced following the Supreme Court’s overturning of Roe v. Wade, due to Democrats’ unfounded concerns that the Supreme Court could use the Dobbs decision to overrule the Court’s Obergefell gay marriage decision. The measure passed the House in July with the help of 47 Republicans, but Senate Majority Leader Chuck Schumer (D-NY) agreed to postpone a vote until after the midterms so that lawmakers from both sides of the aisle could attempt to address religious liberty concerns.

As a report from Slate noted, the bill “does not go as far as Obergefell. In that decision, the Supreme Court directed every state to license same-sex marriages—that is, to issue a marriage certificate to same-sex couples. The RFMA does not codify this component of Obergefell.” According to the report:

Sens. Tammy Baldwin (D-WI), Kyrsten Sinema (D-AZ), Susan Collins (R-ME), Rob Portman (R-OH), and Thom Tillis (R-NC) are responsible for the added amendment, entitled “No Impact on Religious Liberty and Conscience.” That amendment states that nothing in the law “shall be construed to diminish or abrogate a religious liberty or conscience protection otherwise available to an individual or organization under the Constitution of the United States or Federal law.” The amendment also states that:

Consistent with the First Amendment to the Constitution, nonprofit religious organizations, including churches, mosques, synagogues, temples, nondenominational ministries, interdenominational and ecumenical organizations, mission organizations, faith-based social agencies, religious educational institutions, and nonprofit entities whose principal purpose is the study, practice, or advancement of religion, and any employee of such an organization, shall not be required to provide services, accommodations, advantages, facilities, goods, or privileges for the solemnization or celebration of a marriage.

Any refusal under this subsection to provide such services, accommodations, advantages, facilities, goods, or
privileges shall not create any civil claim or cause of action.

But religious liberty proponents say the amendment does nothing to shield Americans who have a traditional view of marriage from being targeted under the law. Heritage Action for America Executive Director Jessica Anderson released a statement saying RFMA is an “unnecessary piece of legislation that provides for lawsuits against those who simply hold a different view on marriage.” She continued:

It seeks to put the federal government in charge of marriage, wipes out the rights of individuals to act in accordance with their personal beliefs, and discriminates against religious people treating them as bigots under the law. To make matters worse, the Senate is only now considering the bill in a lame-duck period after the American people voted.

Supporters of the legislation have said the expected consideration of a Tillis-Collins-Baldwin amendment would address the religious liberty problems in the original bill — but it would not. It is a messaging exercise that has no teeth, and religious Americans would still be subject to discrimination and targeting under the bill. Any senator who’s serious about religious liberty would be insisting on the inclusion of the Senator Mike Lee’s amendment based on the First Amendment Defense Act, which would actually protect religious liberty. Rather than respecting individuals, this legislation would open them up to persecution, fines, and punishment.

The Heritage Foundation’s Roger Severino wrote that the so-called religious liberty amendment would “provide nothing that is not already guaranteed.” He wrote:

And it doesn’t cover areas where forced participation in same-sex celebrations still occur, such as with private bakers, florists, photographers, and other wedding vendors. …The drafters of these amendments are conjuring the illusion of religious freedom while undercutting it at every turn.

Not only is this language light years more radical than the justices’ ruling seven years ago — cracking down on parents, charities, adoption agencies, teachers, Christian schools, counselors, and Bible-believing professionals — the government would be declaring open season on anyone who believes in marriage as it’s always been: the union of a man and woman.

The advancement of RFMA is yet another instance of Senate Republicans providing the votes needed to pass overreaching Democrat legislation, which includes broad-sweeping bills concerning gun control and infrastructure.