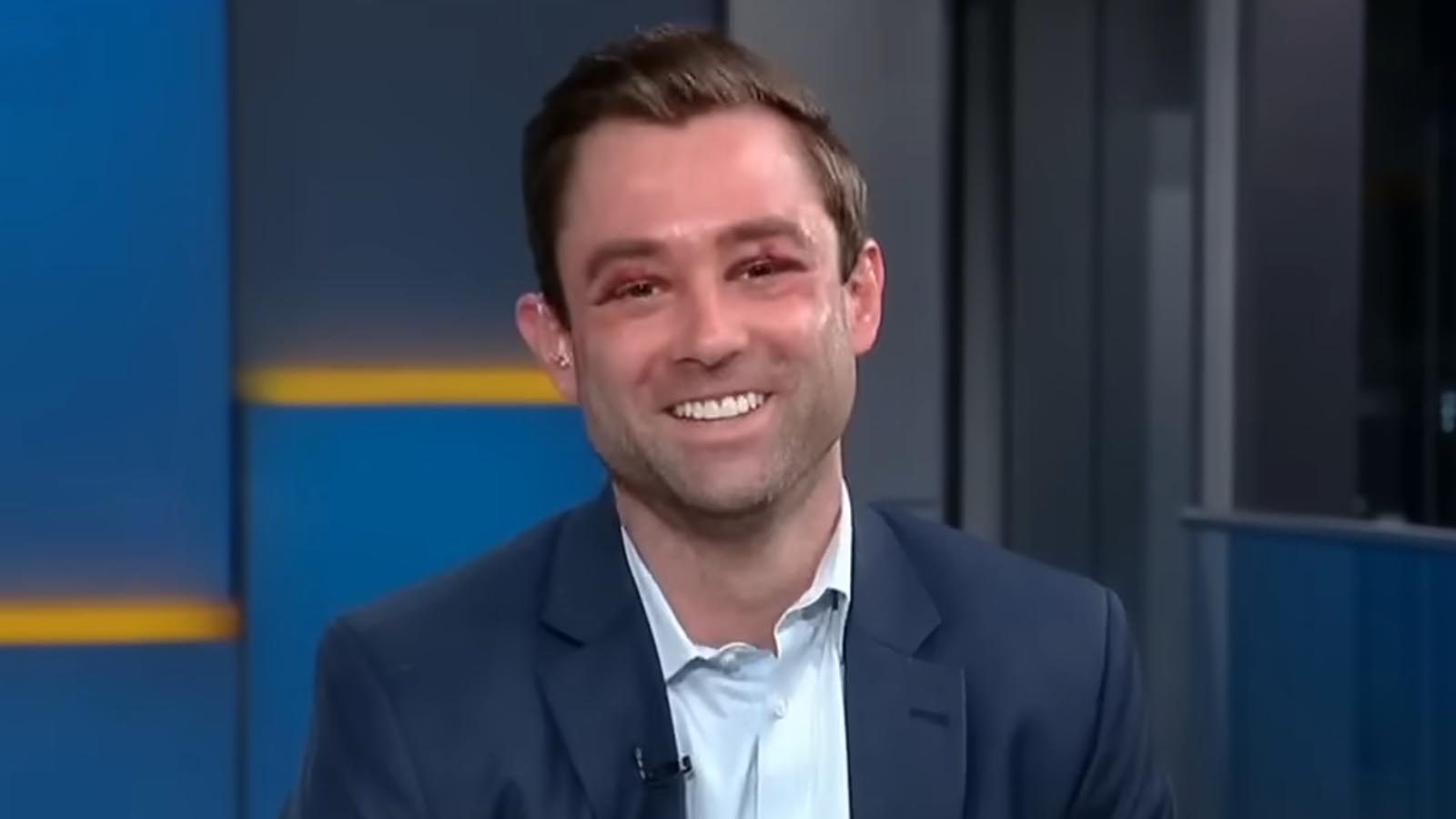 The barbarians continue to wreck the blue cities.

That was evident when Fox News weatherman Adam Klotz appeared Monday morning on “Fox and Friends,” still showing signs of the beating he took at the hands of several youths on a New York City subway early Sunday.

And he had questions about safety in New York.

Riding a subway car with perhaps two dozen passengers, Klotz interfered with the group as they set the hair of another passenger, an elderly man, on fire. The group then turned on Klotz.

“There’s a group of teens, and one of them’s lighting a joint, and just with that lighter, they put it in the guy’s hair, and his hair went up POOF! Like a matchbook,” Klotz told his colleagues.

“I said ‘Whoa! You can’t do that! That’s not cool,” he continued. “And that’s all it took. I was the focus of all their attention.”

While the elderly man was able to slap out the flames, Klotz took a punch from one of the teens and moved to a different subway car. But later, he was attacked by the entire group and realized they were trying to knock him unconscious.

“The whole group — the doors open again at another stop — the whole group just comes and bum rushes me, and suddenly I’m, like, on the ground.

“And then, once you’re unconscious, and you’re getting punched, there’s no defense,” Klotz said. “So I was just doing my absolute best to cover my head, so it couldn’t get knocked out.

“And now my side is black and blue. My knee I can hardly bend because I was getting kicked and punched.”

Klotz said bystanders were quick to help him, only after the attackers were gone. “But when it was happening, no one was doing anything. But I mean, I get it! Look what happens when you step up for somebody.

“I tried to step up for somebody, and this is what just happened to me. Like, why would anyone want to do this to themselves?”

Even after the assault and after police had been called, the attackers — whom he said were aged 15 to 17 — returned and continued to verbally harass him. “You see what happens when you talk to us?” one of them asked Klotz, indicating “the older guy, he didn’t say anything to us, and he’s fine.”

Except, of course, the “older guy” had his hair set afire.

Police apprehended three of the youths as possible suspects, but they were released to their parents, Fox News reported.

Following the attacks on himself and the older man, Klotz had some questions, five to be exact.

“Why is the weather guy on the train trying to stop crime in the middle of the night? Like, where is [Mayor] Eric Adams? Where is the city? Why am I doing this? Why is it up to me?”

Ironically, the background of Mayor Adams is in law enforcement. And Klotz noted that at one time police were riding subway trains.

Apparently New York is not taking the incident too seriously since “Fox and Friends” co-host Steve Doocy quoted the New York Post as saying the attacks on Klotz were classed as misdemeanors.

“How is that a misdemeanor?” Doocy asked. “They beat the crap out of you … They could have killed you.”

While Klotz could file charges on the suspects, when asked, he seemed to hedge on the idea, saying he was more concerned about “structural” issues.

“Put some cops down there,” he said. “I want Eric Adams to do something more long term, that this won’t happen to somebody else, more than me just getting some sort of revenge in the short term.”

Asked if he had a message to the teens who beat him, Klotz said: “Don’t do this again.

“You’ve got your whole lives. Don’t throw your lives away and do this again in a few more years. It’s not worth it — I’m not worth it! This is not worth it.”

The attacks on Klotz and the elderly man are symptoms of what is happening in New York and other blue cities across America.

People are being attacked on NYC subways, even being pushed onto the tracks.

While there was somewhat of a turnaround in New York during the administration of Mayor Rudolph Giuliani and its “broken window” philosophy of not allowing small things to build up into big ones, those days are gone.

The stormy old days of New York City have returned, perhaps worse than before. Just ask the weatherman.