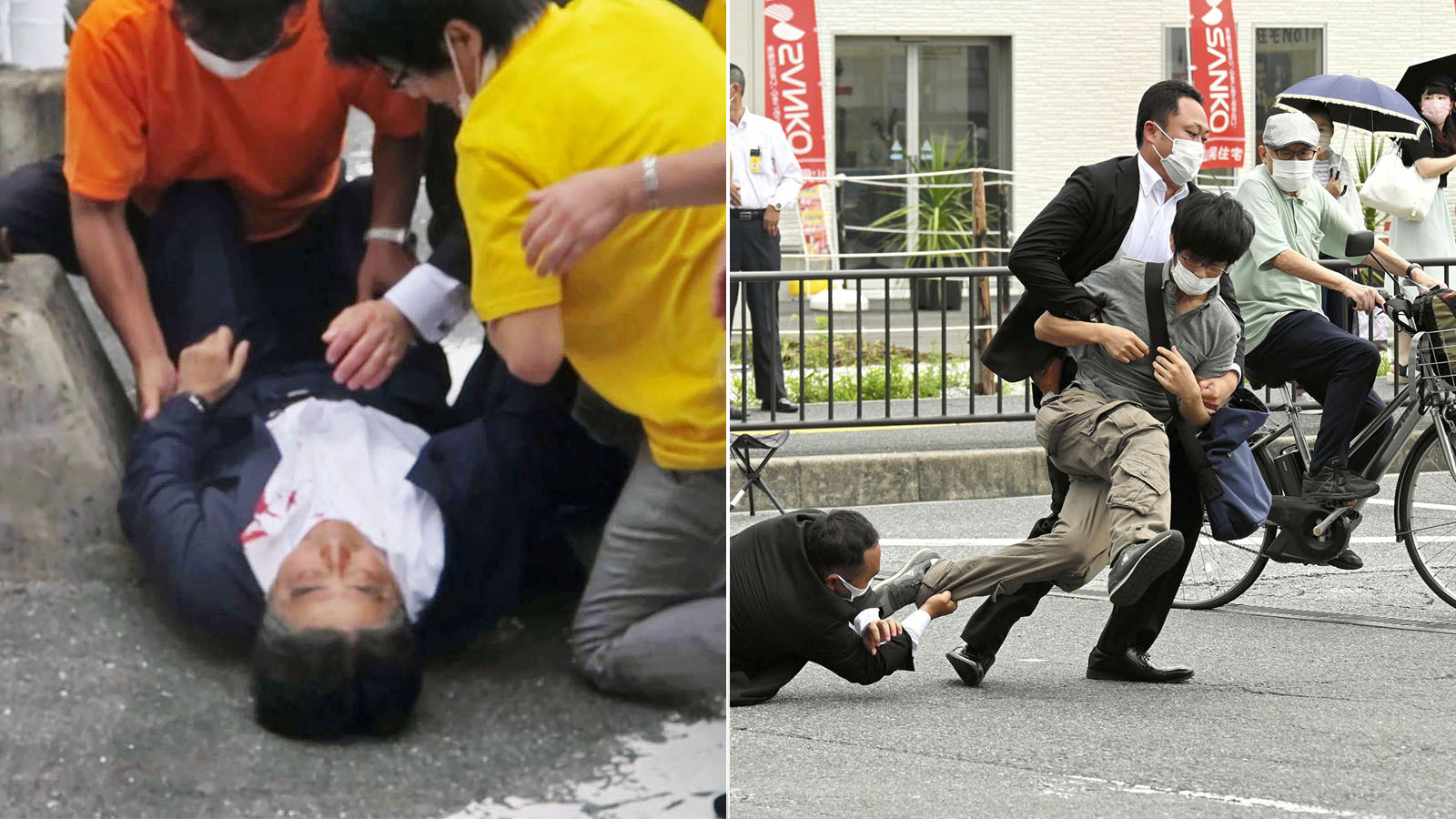 Former Japanese Prime Minister Shinzo Abe has died after being shot in the city of Nara, Japan.

Abe, 67, had been making a campaign speech at around 11 a.m. local time on Friday ahead of an election Sunday for the upper house of the Japanese Parliament when he was shot, the Associated Press reported. An NHK reporter heard what sounded like two gunshots and saw Abe bleeding. He collapsed on a street while delivering a speech in the western prefecture. Video showed security guards rushing to him and people attempting to provide medical assistance.

Abe died at Nara Medical University hospital at 5:03 p.m. Japan time, where he was flown to for treatment after the shooting. Upon arrival, Abe showed no vital signs and had two gunshot wounds to his neck, damage to his heart, and internal bleeding, according to the doctor that treated him.

Abe was pronounced dead after resuscitation efforts, including surgery and a blood transfusion, failed, according his doctor.

#BREAKING on @IndiaToday: First images emerging from the shooting at Nara- former Japanese PM Shinzo Abe down on the ground, reportedly not showing any vital signs after attack pic.twitter.com/ICUjNEjOk2

Japanese Prime Minister Fumio Kishida, who had quickly traveled back to Tokyo, said hours after the shooting that the attack “should be condemned in the strongest terms.”

Authorities said a male suspect has been arrested at the scene for attempted murder. Tetsuya Yamagami, a Nara-area man in his 40s and a former Maritime Self-Defense Force member, has been identified as the suspected shooter by local media.

Kishida declined to get into a motive when speaking with reporters, but NHK reported the suspect told police that he was frustrated with Abe and wanted to kill the former prime minister.

Here's a close-up view of the apparent weapon from which two shots were fired at @AbeShinzo. pic.twitter.com/MUrWEKrSQO

A firearm that appears to be a handmade shotgun was confiscated. Bystander video appeared to show a cloud of smoke when the shooting happened.

Kishida headed back to Tokyo from Yamagata after canceling campaign events. Other officials were also returning to Tokyo.

Officials from the United States, as did people around the world, expressed shock and condolences.

“We are shocked and saddened to hear about the violent attack against former Japanese Prime Minister Shinzo Abe. We are closely monitoring the reports and keeping our thoughts with his family and the people of Japan,” a White House spokesperson said before Abe was declared dead, according to Voice of America.

“We are all saddened and shocked by the shooting of former Prime Minister Abe Shinzo. Abe-san has been an outstanding leader of Japan and unwavering ally of the U.S. The U.S. Government and American people are praying for the well-being of Abe-san, his family, & people of Japan,” said U.S. Ambassador to Japan Rahm Emanuel in a tweet.

We are all saddened and shocked by the shooting of former Prime Minister Abe Shinzo. Abe-san has been an outstanding leader of Japan and unwavering ally of the U.S. The U.S. Government and American people are praying for the well-being of Abe-san, his family, & people of Japan.

Japan is known to have some of the strictest gun control laws in the world, and shootings are considered rare in the county. Gun deaths in the country are relatively uncommon and generally hover around a dozen each year. In 1932, Japanese Prime Minister Inukai Tsuyoshi was fatally shot while serving in office by junior navy officers during an attempted coup. In 1960, Inejiro Asanuma, a leader in the Japanese Socialist Party, had also been slain by an assailant wielding a sword. The mayor of Nagasaki, Iccho Ito, was shot and killed in 2007.

Hard to overstate how unusual this shooting in Japan was. Yes, a PM was assassinated in 1932 and a party leader in 1960, but in a typical year fewer than 10 Japanese are murdered with guns.
In my five years in Japan, I covered murders, but never a shooting that I recall.

Abe had been serving as a member of the House of Representatives, which is the upper chamber of the Japanese Parliament. He became prime minister of Japan in 2012 and served until 2020, finishing out as the longest-serving prime minister in Japanese history. He cited poor health as a reason for his resignation.

A member of the Liberal Democratic Party, the ruling center-right party in Japan, Abe had assumed office as prime minister at a time when Japan’s economy had been mired by low growth and strong disinflationary headwinds.

To counter this, Abe championed a number of economic reforms such as monetary easing, heightened fiscal stimulus, and other reforms that have become known as Abenomics.

A vocal critic of China, Abe sought to strengthen ties with the United States and the West. He was regarded as a pioneer of the “free and open Indo-Pacific” concept that has since been integrated into the framework for the U.S. strategy for the region. The concept called for stronger coordination between countries with similar interests in the region. The goal was to appeal to smaller nations in the region that had been reluctant to choose a side in the rivalry between the U.S. and China.

Additionally, Abe was known for his efforts to bolster Japan’s defense capabilities, often leading the charge for increased defense spending. He also supported legislation that allowed Japan’s military to engage in conflicts abroad, departing from a policy of reserving military force for self-defense purposes.

Abe sought to position Japan as a diplomatic heavyweight in Asia. He has been vocally supportive of Taiwan, calling on the U.S. to clarify it would intervene on Taiwan’s behalf if the island was attacked by China. When former President Donald Trump was seeking to ease relations with North Korean leader Kim Jong-Un, Abe had unsuccessfully sought a summit with the dictator to similarly mend relations.

“Absolutely devastating news that former Prime Minister Shinzo Abe of Japan, a truly great man and leader, has been shot, and is in very serious condition,” Trump said on Truth Social before Abe was declared dead. “He was a true friend of mine and, much more importantly, America. This is a tremendous blow to the wonderful people of Japan, who loved and admired him so much. We are all praying for Shinzo and his beautiful family!”

Domestically, Abe stirred controversy with some of his nationalist takes on history, including denials that Japan had coerced “comfort women” from South Korea into sexual slavery. This has been a key pressure point in relations with South Korea, which deteriorated under his tenure. Both South Korea and Japan have been regarded as the top U.S. allies in Asia.