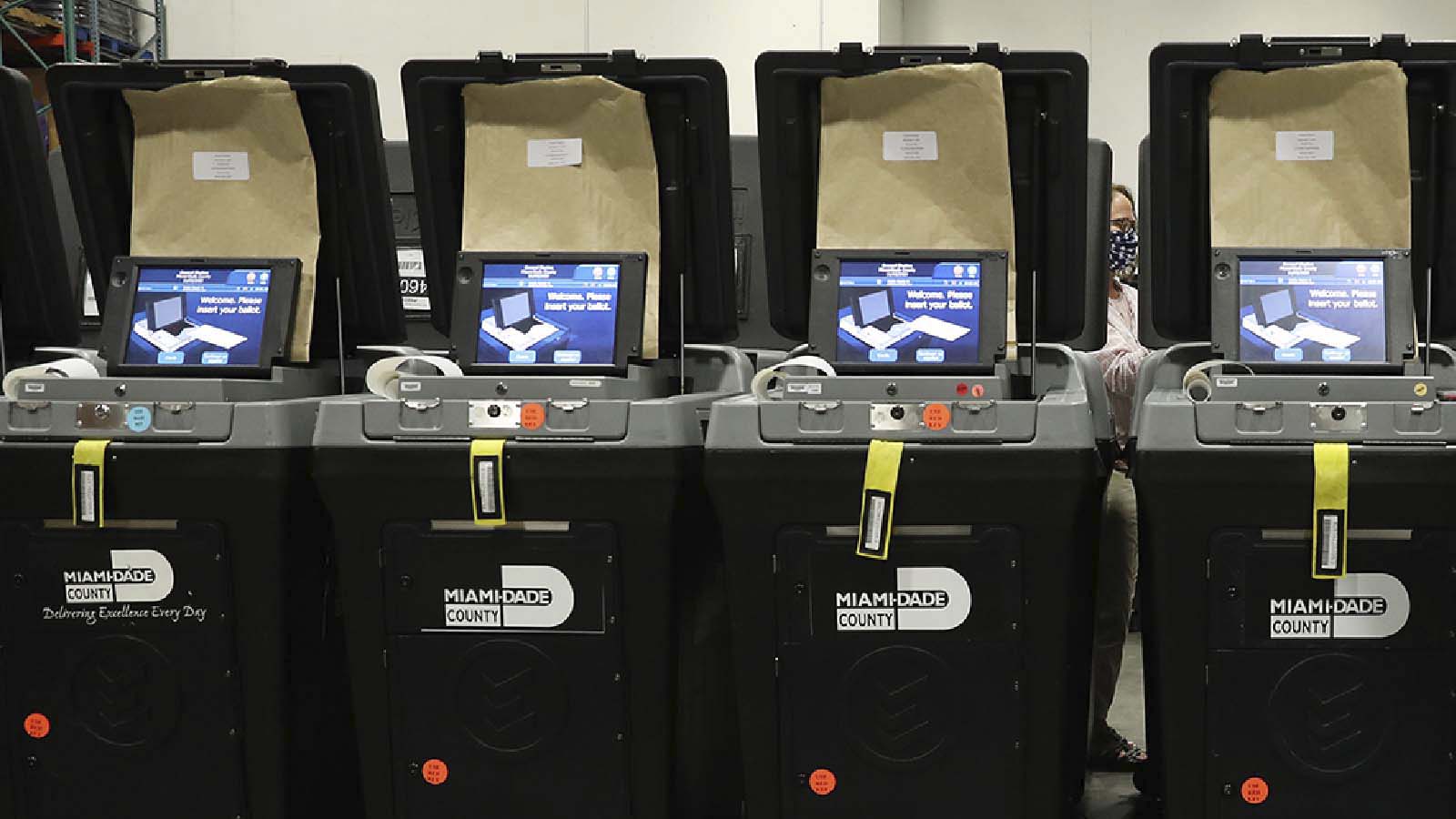 A federal judge announced he will hear evidence against the use of electronic voting machines in Arizona’s upcoming midterm elections on Thursday, July 21.

Judge John J. Tuchi issued an order on Monday granting the hearing in response to a request for a preliminary injunction against the use of electronic voting machines and subsequent motions to dismiss filed by defendants Arizona Secretary of State Katie Hobbs and the Maricopa County Board of Supervisors.

The original injunction was filed by plaintiffs Kari Lake, a candidate for Arizona’s gubernatorial race, and Arizona state Rep. Mark Finchem, who is running for secretary of state.

“As there is substantial overlap in the motions, the Court will entertain consolidated presentations from the parties,” the judge ordered. “Plaintiffs will have no more than two hours to present all argument and, as pertains to their application for injunctive relief, evidence. Defendants shall have no more than three hours collectively to present their argument and evidence.”

In the complaint, Lake and Finchem argued that they have “a constitutional and statutory right to have their ballots, and all ballots cast together with theirs, counted accurately and transparently so that only legal votes determine the winners of each office contested in the Midterm Election.”

“The use of untested and unverified electronic voting machines violates the rights of Plaintiffs and their fellow voters and office seekers, and it undermines public confidence in the validity of election results,” the complaint reads. “Just as the government cannot insist on ‘trust me,’ so too, private companies that perform governmental functions, such as vote counting, cannot be trusted without verification.”

On July 21, a federal judge will hear the request from @KariLake and @RealMarkFinchem for a preliminary injunction to block the use of electronic machines in elections. Sets up to three hours for the hearing.

With weeks before the crucial primaries in Arizona, election officials are admitting they made a “mistake” with ballots.

As noted by Yahoo News, over 60,000 Pinal County voters received early voting ballots with mistakes, and county officials told local news stations that they do not have a clear solution of when they will correct the issues.

County Attorney Kent Volkmer said they estimate 63,000 ballots have been impacted so far, revealing that the County Elections Office sent out “mistaken” ballots to at least seven cities or towns in Pinal County.

Even more concerning, Volkmer admitted the county doesn’t have a clear solution.

“We are not sitting on our hands,” said Volkmer. “My office, we worked through the weekend Saturday, Sunday. We are exploring all of our options.”

“Right now, I believe potentially holding a separate special election for those districts seems to be the most likely scenario,” Volkmer added

He said that could change and the decision could come down to a judge, saying: “This is exclusively limited to these seven jurisdictions and their municipal races.”

“There are all of these legal requirements, and frankly impediments, to fix our error,” said Volkmer. “But it’s done to protect the voter.”

Pinal County elections director David Frisk is taking full responsibility for the mistake. “This was not a system glitch or a computer error or anything nefarious. It was no fault of anyone in the recorder’s office; it’s my mistake,” Frisk said.

Some Pinal County residents will have to file a second ballot after a “human error" caused 60,000 bad ballots to be sent out.

Because of the error, voters in 7 cities and towns in Pinal County received early ballots missing their local municipal races: https://t.co/TX7vWXqX2U pic.twitter.com/CT66ACMtaR

Secretary of State Katie Hobbs, a Democrat who is also running to be Arizona’s next governor, said her office has completed an “extensive” investigation and found the system that created the ballots didn’t contribute to the errors on the ballots.

Her office claimed the system is still secure and reliable for the 2022 election.

“The Pinal County Elections Director David Frisk has been very clear that these issues were the result of human error,” Hobbs said. “The Secretary of State’s Office will continue to support Pinal County in correcting this issue and ensuring that all voters have a chance to cast a ballot in the appropriate elections.”

“The board unanimously voted to approve the plan. Volkmer says the bad ballots already sent out will still be good for federal, state, and county elections. Anyone who received a ballot missing a local town or city race must fill out a second ballot containing only those races,” AZ Family reported.