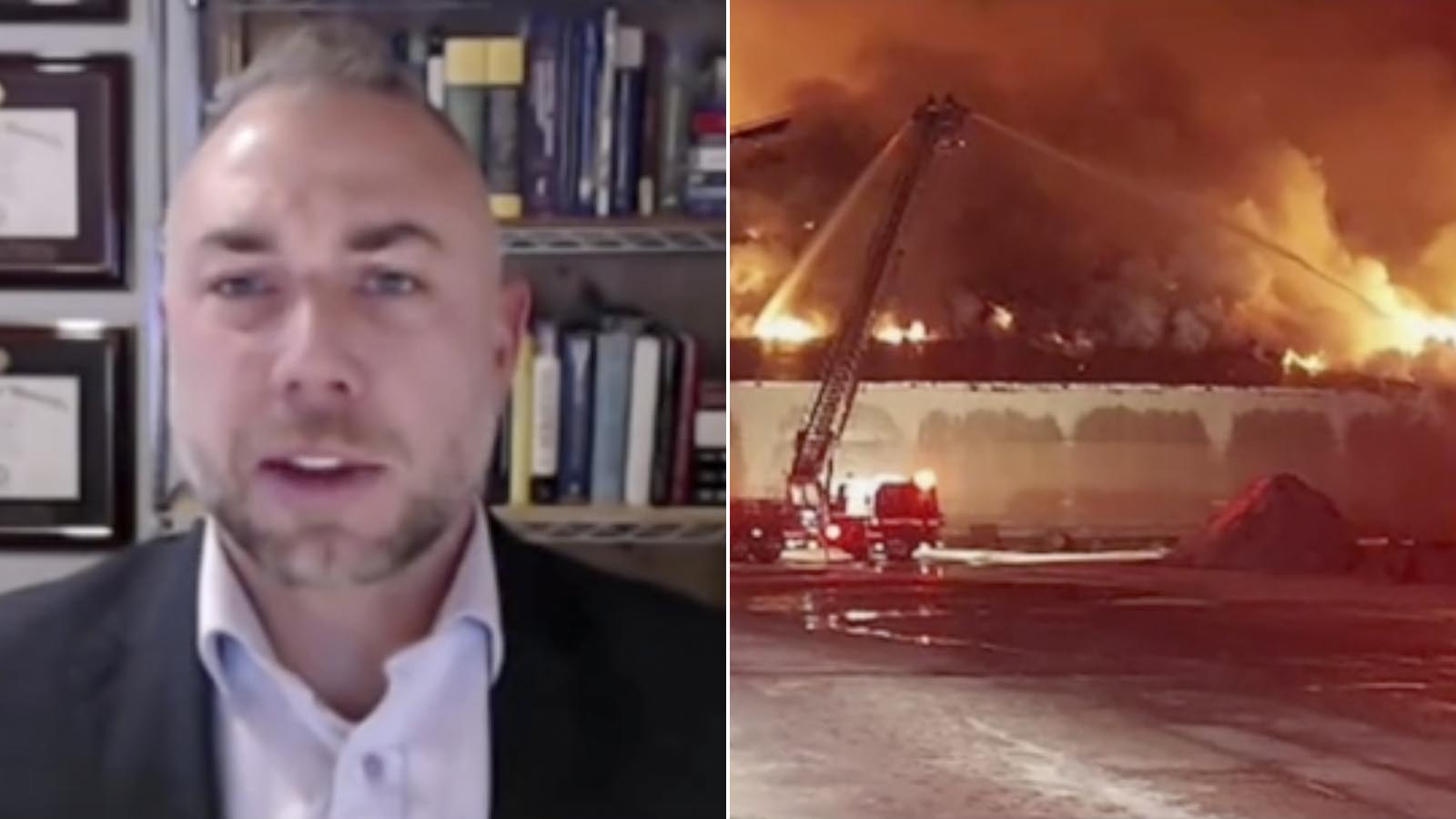 The outbreak of damaging fires at U.S. food production plants in recent years has generated headlines and plenty of questions.

In an interview posted to the social media website Rumble this week, Dr. Andrew Huff, an epidemiologist with a background in what he described as “bioterrorism and agri-terrorism,” suggested an answer to what’s behind the outbreak.

And for Americans accustomed to living in relative peace and a land of plenty, it won’t be comforting. 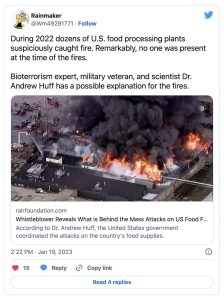 Besides being a scientist, Huff’s personal biography bio states he is a combat veteran who served in Operation Enduring Freedom and Operation Iraqi Freedom.

He is best known recently as the former vice president of the research group EcoHealth Alliance and author of the book “The Truth About Wuhan: How I Uncovered the Biggest Lie in History,” which argues that the COVID-19 pandemic resulted from a “genetically engineered agent” leaked from the Wuhan Institute of Virology in Wuhan, China.

That conclusion was considered official heresy in the early days of the pandemic, but the “lab leak theory” has never gone away.

Huff’s take on the destruction at food processing plants in the U.S. and around the world is just as explosive.

In an interview with Emerald Robinson, a journalist with the conservative RAIR Foundation (Rise Align Ignite Reclaim), on her podcast “The Absolute Truth with Emerald Robinson,” Huff said the spate of suspicious fires matches up eerily well with government data he’d accessed while working on his Ph.D.

He said the information was compiled in a document called “FASCAT” or Food and Ag Sector Criticality Assessment Tool. He used the document in later work, which basically amounted to studying a “roadmap to attacking critical infrastructure in the United States.”

Even though the fires have not been attributed to any specific cause, Huff has no hesitation about using the word “attacks” to describe them.

“There’s been a number of attacks,” Huff told Robinson. “I think, globally, there’s been, probably, roughly around 200 attacks. In the United States and Mexico, I think there’s been somewhere between 130 to 150 attacks now.”

When he analyzed the details of the incidents in comparison to the “most critical systems” of the country’s food production, he said, “it’s a perfect match.”

“I had never seen something so predicted or such a strong correlation in my life,” he said.

He told Robinson that he reported the findings to the Department of Homeland Security and the FBI, but “never received a response back, if you can believe that.”

It’s important to note that Huff said this was taking place while he was tussling with the government over his refusal to back away from the “lab leak” theory about COVID-19.

“This is while the harassment was going on that I’ve experienced and all the crimes the government is committing against me,” Huff told Robinson.

Robinson, a journalist who has interviewed figures like retired Army Gen. Michael Flynn, was intrigued.

“The coincidences are just uncanny,” she said.

“With so many attacks, by now, wouldn’t the government have found who it was?”

“If there was an effort to do so, and if it’s not … you know, I don’t even know how to put it. Would they not have found the perpetrator if it was outside of, you know, some coordinated entity?”

Huff was more direct. Though he said he did not think the U.S. government was involved — “I don’t believe that. I don’t want to believe that” — Huff suggested a “coordinated entity” was exactly the agent behind the incidents. The data that was collected, he noted, was not “classified,” so could have been accessed by an individual or group that wanted to follow the “roadmap” for attacks.

“My belief is that a state-sponsored actor, or a group of people … got a hold of these data and basically working with a number of groups who are aligned against the United States to attack our infrastructure.”

Huff called the agriculture system vulnerable to attacks, both physical and cyber, and said the FBI and the food industry itself has looked into what he called “terrorist attacks,” but with no result.

“But the … targeted nature of these food facilities and how they correlate with these data that were stolen, this is obviously someone who is well resourced doing this, someone who knows what they’re doing.

“They could have generated the assessment or the analysis on their own, independently. I think that would be very difficult and highly unlikely, so there’s definitely a state-sponsored actor or a group of well-sponsored individuals who are doing this.

“It could be both, and they could be aligned.”