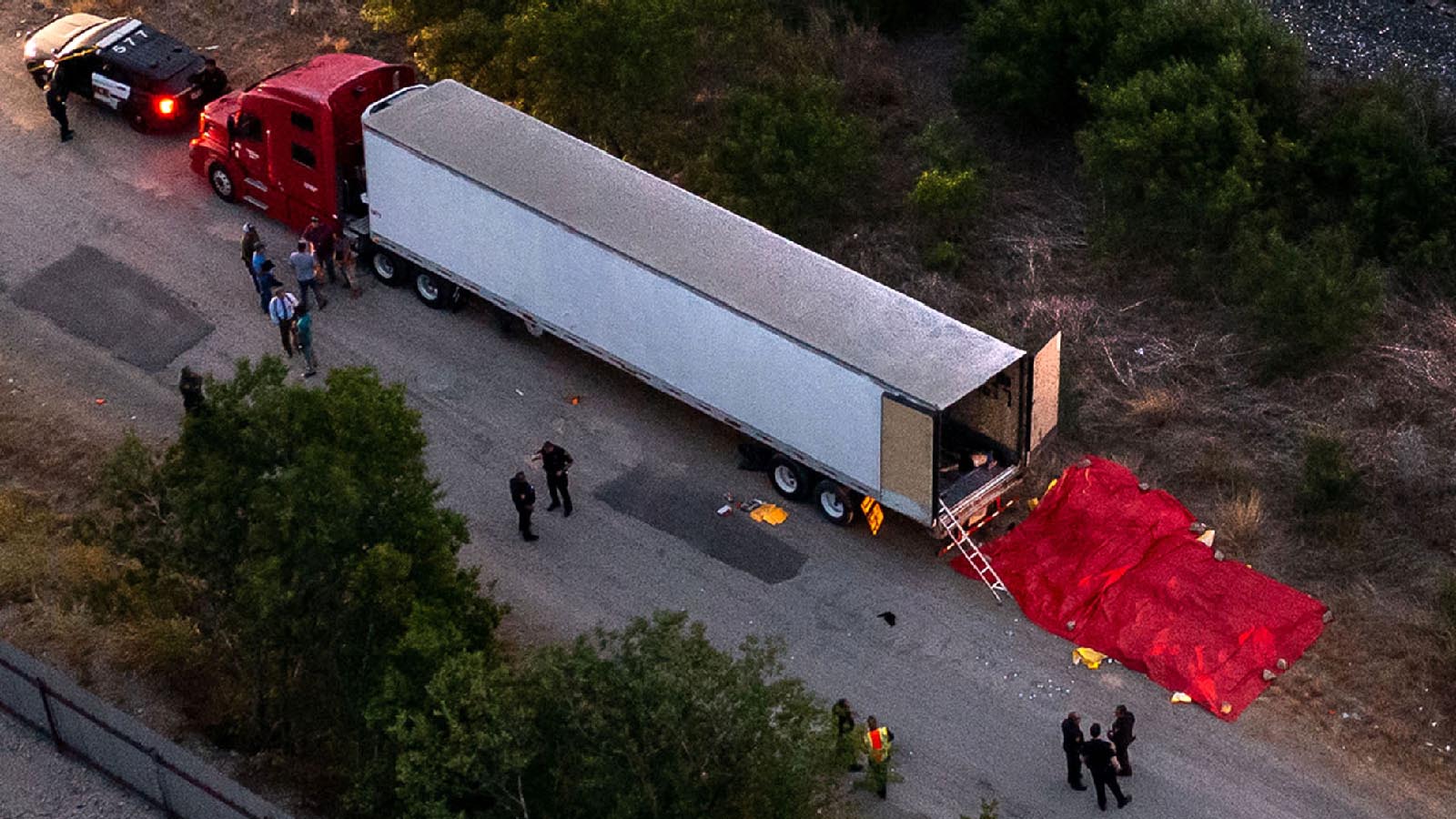 Chilling new details emerged Tuesday in the Texas border horror that left at least 51 migrants dead — including how victims stuffed in a truck were allegedly sprinkled with steak seasoning to mask their odor.

A law-enforcement official told the Texas Tribune that many of the estimated 100 people jammed into the tractor-trailer in San Antonio appeared to have been covered in spices to cover up the odor during the human-smuggling tragedy.

A cry for help coming from the 18-wheeler found abandoned on the southern outskirts of town Monday evening led to the discovery of “stacks of bodies’’ inside the vehicle, which had apparently been made to look like a properly registered truck in an effort to evade detection.

The rig was “cloned,” said the owner of a local Alamo-based trucking company to the San Antonio Express-News — painted to match one of his own, right down to copying his legal vehicle’s Department of Transportation registration number.

“Our reefer [refrigerated trailer] is sitting right in the yard,” Felipe Betancourt Jr., who owns Betancourt Trucking with his father, told the paper. “That one in San Antonio is not our trailer.”

While the truck in San Antonio was made to look like a refrigerated truck, “There was no visible working AC unit on that rig,” said San Antonio Fire Chief Charles Hood.

Temperatures in San Antonio reached a high of 103 degrees Monday amid an ongoing heat wave, and the 51 dead are believed to have succumbed to the heat. The fatalities involved 39 males and 21 females, officials said.

The truck had apparently suffered a mechanical failure when it was abandoned — with the driver then nabbed trying to flee the scene on foot, cops told the New York Times on Tuesday.

The truck driver was apprehended by authorities in a nearby field and taken into federal custody, police said. Two other men also were arrested.

Authorities said the truck crossed the border in Laredo, 150 miles south of San Antonio. The truck then passed through a border checkpoint on Interstate 35, said Rep. Henry Cuellar of Texas. It is unclear whether the migrants were in the truck when it apparently cleared the checkpoint.The spot where the truck was discovered — by a railroad track — is a well-known spot for migrants to be dropped off after being smuggled across the border, said Harry Jimenez, former deputy in charge of the San Antonio ICE office, to The Post.

The San Antonio Express-News reported that bodies had been found for blocks around the truck’s location, suggesting that some of the migrants had tried to make their escape while the vehicle was still moving.

The hospitalized survivors — including four children — were hot to the touch and dehydrated, according to first responders.

An adolescent boy was reportedly critical at University Hospital, while a 23-year-old woman was in serious condition there, the Times said.

There also were two people in critical condition — a 23-year-old woman and a 32-year-old man — at Texas Vista Medical Center, the outlet said.

Two other men and a woman were listed in critical but stable condition at Methodist Metropolitan hospital.