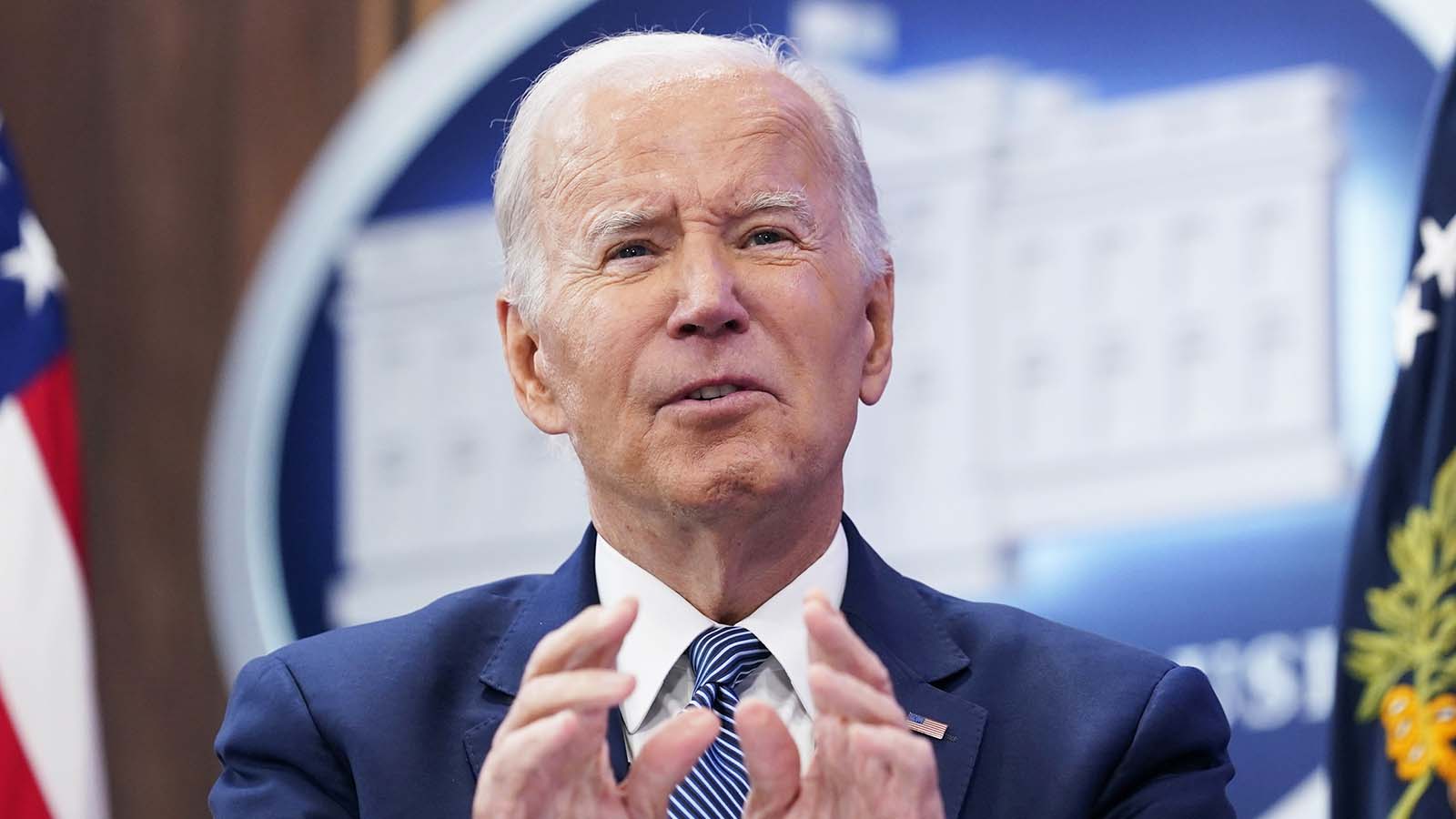 Right around Labor Day, following a Democratic summer surge, I wrote a lengthy analysis about the state of the 2022 election cycle.

My bottom line was that, setting aside all the noise, the so-called political ‘fundamentals’ remained very rough for for the ruling party — so the opposition was still well-positioned to take over at least the House, if not the Senate, as well.

We are now three weeks out from the election. We highlighted movement back toward the GOP in recent polling in a post published yesterday, noting an especially alarming new data set for Democrats produced by the New York Times and its polling partner, Siena College. Feast your eyes on this: 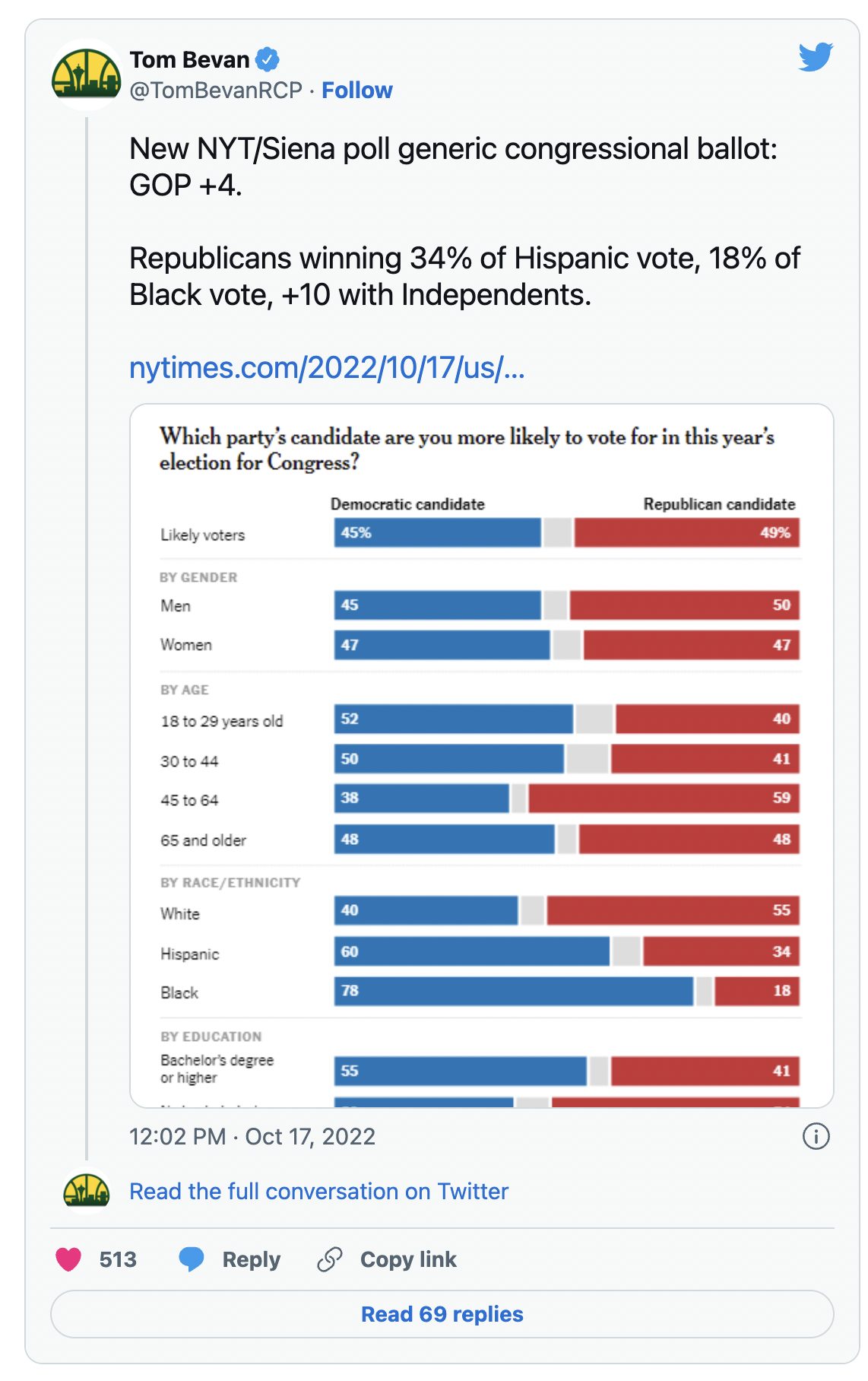 A national environment in which Republicans win the House ‘popular vote’ by four points would be a wipeout. Who knows if it will actually materialize, but if it does, it’s easy to imagine a number of close Senate races also tipping the GOP’s way. Winning one-third of Hispanics seems low. Winning nearly one-in-five black voters seems high.

Keep an eye on both in the exit polling. That +10 number among independents is key. In the 1994 and 2010 red wave blowouts, indies went red by 14 and 16 points, respectively, per exit polls.

If Republicans can carry that swing group by double digits this year, they’ll be in pretty strong shape, particularly if GOP turnout is elevated, as expected. More nuggets from the NYT/Siena numbers:

The economy and inflation combine for 44 percent of the ‘top issue’ pie, versus five percent for abortion. (Remember this)? More voters say they ‘strongly’ disapprove of Biden’s job performance than approve of it at all (45 vs. 39 percent).

And a tie among women? I’m skeptical, but that would be devastating to both Democrats’ electoral chances, as well as some major narratives in which they’re heavily invested. This swing would certainly help explain it:

Abortion has stayed flat at top concern of 5% of voters since July.https://t.co/JPRgHom8kZ

A shift of 32 net points within the independent women demographic since mid-summer? I’m skeptical, but even if it’s half that, it’s hugely significant. And it really does come back to those fundamentals. Two-thirds of voters believe the country is on the wrong track. The president’s job approval is nearly 20 points underwater.

Inflation is historically high. Most Americans believe we are in a recession, and experts are warning of additional pain to come. And the party in power controls all of Washington, heading into the first midterm election after a new president was elected. On all counts — political, economic, historical — Democrats should be in real trouble, and Republicans should be favored. The data from various pollsters, including NYT/Siena, appears to be predictable evidence of the fundamentals asserting themselves.

If the GOP has a strong night in November, in retrospect, that will look like it was always inevitable. If they don’t have a strong night, that would be the true surprise. On the heels of the president calling the US economy “strong as hell” through a mouthful of ice cream, I’ll leave you with this piece of recent historical context:

Currently identical to 2014 — a cycle in which the GOP won its largest House majority (247 seats) since 1928 & netted nine Senate seats (controlling 54 total). I’m not as bullish this cycle as I was then, but some interesting context… https://t.co/UVfXnCZQUk

Republican-aligned pollster Kristen Soltis Anderson replied to that tweet with a reminder about what happened eight years ago: “In 2014 there were a handful of races that were surprisingly close (think: Ed Gillespie almost unseating Mark Warner out of nowhere!).”

If 2022 ends up resembling 2014 at all, the likelihood of surprises is fairly high — and those surprises would be mostly unpleasant ones for the party in power. I’m not sure ‘counter-fundamentals’ messaging like this or this is going to cut it: