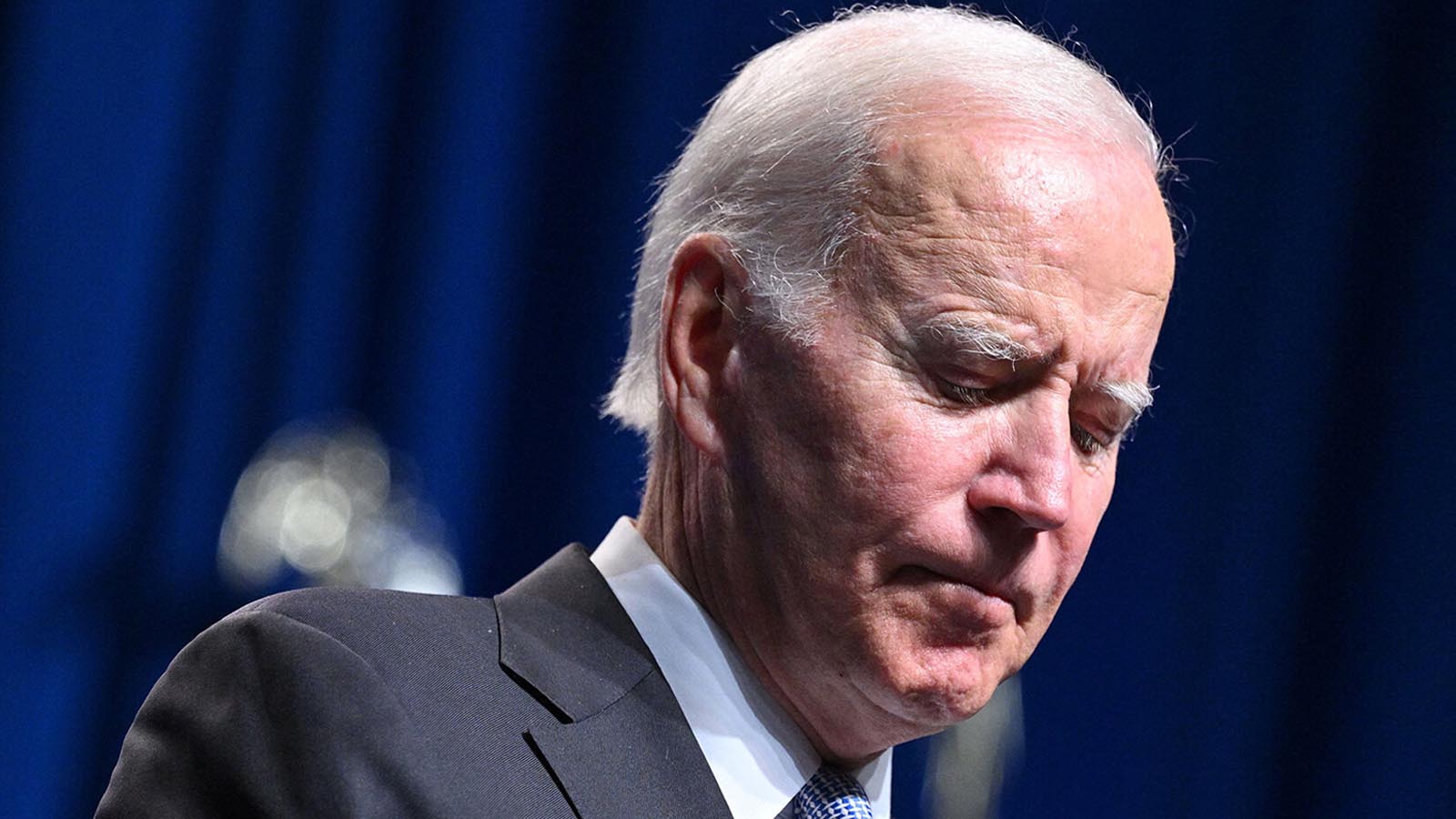 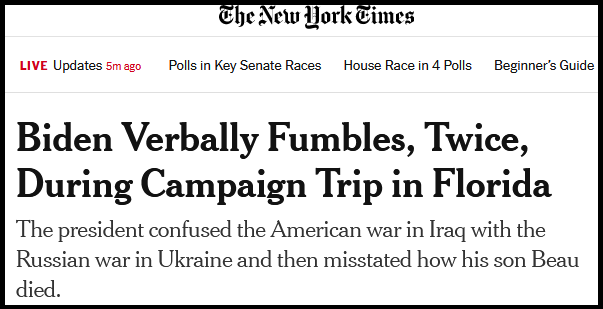 Biden conflated the war in Ukraine with the Iraq war, then lied when he said he got the two confused because his son Beau died in Iraq.

Biden: “Inflation is a worldwide problem right now because of a war in Iraq… excuse me, the war in Ukraine. I’m thinking about Iraq because that’s where my son died.”

NEW – Biden: "Inflation is a worldwide problem right now because of a war in Iraq… excuse me, the war in Ukraine. I'm thinking about Iraq because that's where my son died." pic.twitter.com/G2QeYUqdHN

The same day, the White House was called out by CNN’s Daniel Dale over a now-deleted tweet claiming “Seniors are getting the biggest increase in their Social Security checks in 10 years through President Biden’s leadership,” when in fact – as Dale noted, “The size of Social Security checks is linked, by law, to inflation. This year’s increase is unusually big because the inflation rate is unusually big.”

And while the White House deleted the Tweet, Biden repeated the claim twice last week. As The Blaze notes;

There’s a lot that’s wrong with that declaration. First of all, this will be the seventh increase in a row. Second, increases are routine because they happen automatically — based on changes to a particular calculation of the Consumer Price Index (CPI-W), and not the actions of the president.

What makes Biden’s boast especially preposterous is that it ultimately points to the fact that what’s happened “on his watch” is 40-year-high price inflation.

Fast forward four days, and both CNN and the New York Times have gone scorched earth on Biden, in what appears to be a’ coordinated effort’ to distance mainstream Democrats against a President who’s become an increasing liability with batshit crazy comments, obvious confusion, and several recent sniffings.

Adding this CNN fact check to the thread. Looks like a coordinated effort.

There's a reason Daniel just decided to start doing his job two years in and 4 days before a before an election that effectively ends Biden's presidency. Try and guess what that is. pic.twitter.com/EIA7YiFmDc

On Friday, the Times took Biden and his White House to task for a series of false statements about the state of the economy and what Biden has done for it.

For example, Biden routinely positions himself as an unprecedented cutter of budget deficits, as he did recently in Syracuse:

“This year the deficit, under our leadership, is falling by $1.4 trillion. Ladies and gentlemen, the largest ever one-year cut in American history on the deficit.”

Not so fast, says the Times:

Left unsaid was the fact that the deficit was so high in the first place because of pandemic relief spending, including a $1.9 trillion economic aid package the president pushed through Congress in 2021 and which was not renewed. Mr. Biden was in effect claiming credit for not passing another round of emergency assistance.

What the Times didn’t point out was that Biden and the Democratic Congress have teamed up to significantly increase deficits over the budget horizon, as illustrated by the Manhattan Institute’s Brian Riedl: 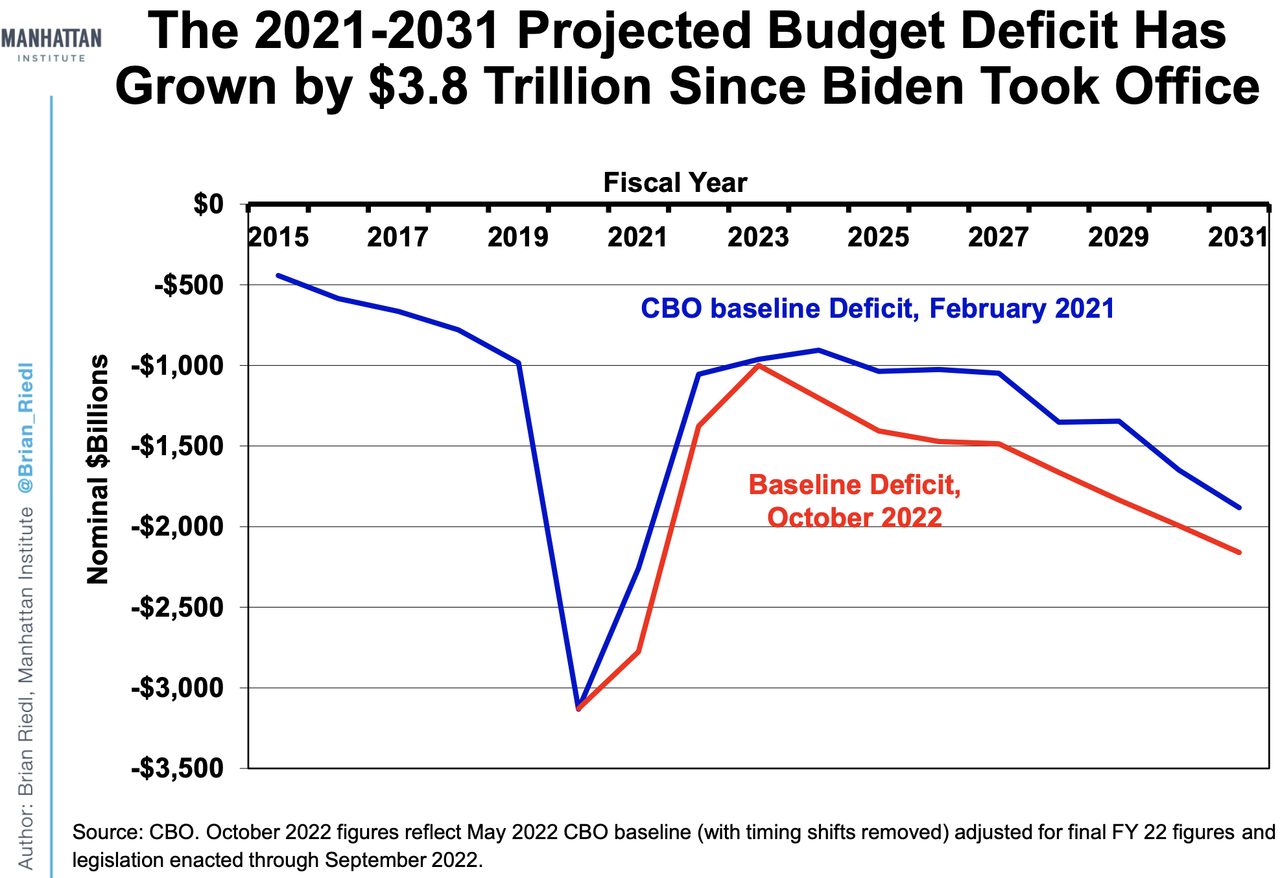 Hilarity ensued over the Social Security self-own, as Twitter users “added context” that demolished the boast… causing Elon Musk to tweet; “The system is working.”

After the White House deleted the tweet, press secretary Karine Jean-Pierre said, “Look, the tweet was not complete. Usually when we put out a tweet we post it with context, and it did not have that context.”

"The tweet was not complete. Usually when we put out a tweet we posted with context and it did not have that context."@PressSec responds to deleted White House tweet that gave President Biden credit for Social Security increases. https://t.co/kLf3TkYg3L pic.twitter.com/4jnchY9XaO

What’s particularly damning about the Social Security brag is that, rather than bubbling up in spontaneous Biden remarks — always a nail-biting experience for his team — this was part of a prepared speech. That speaks volumes about the collective economic wisdom of his controllers.

The Times also hit Biden for saying — off the cuff — that he pushed student debt forgiveness through Congress, where “I got it passed by a vote or two.”

Though many were quick to brand this a “lie,” when you consider he personally instituted debt forgiveness via an executive order that was many months in the making, it’s more likely it was the latest example of his accelerating mental decline.

Not surprisingly, the Times couldn’t bring itself to explicitly raise that possibility, but did note that Biden’s assertion was “perhaps the most head-scratching” of his false economic statements, as it was “starkly at odds with the reality,” especially when his executive order is now facing multiple court challenges.

The Times then called out misleading or false communications about economic growth, gas prices and inflation in general. 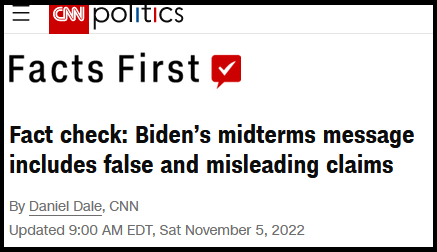 They ding Biden on the Social Security propaganda and lying about corporate taxes.

Biden repeatedly suggested in speeches in October and early November that a new law he signed in August, the Inflation Reduction Act, will stop the practice of successful corporations paying no federal corporate income tax. Biden made the claim explicitly in a tweet last week: “Let me give you the facts. In 2020, 55 corporations made $40 billion. And they paid zero in federal taxes. My Inflation Reduction Act puts an end to this.”

But “puts an end to this” is an exaggeration. The Inflation Reduction Act will reduce the number of companies on the list of non-payers, but the law will not eliminate the list entirely.

That’s because the law’s new 15% alternative corporate minimum tax, on the “book income” companies report to investors, only applies to companies with at least $1 billion in average annual income. (There are lots of nuances; you can read more specifics here.) According to the Institute on Taxation and Economic Policy, the think tank that in 2021 published the list of 55 large and profitable companies that avoided paying any federal income tax in their previous fiscal year, only 14 of these 55 companies reported having US pre-tax income of at least $1 billion in that year.

In other words, there will clearly still be some large and profitable corporations paying no federal income tax even after the minimum tax takes effect in 2023. The exact number is not yet known. -CNN

CNN then called out Biden for lying about the national debt and the deficit, the unemployment rate, his student debt cancellation scheme, gas prices, Chinese President Xi Jinping, and the Trump tax cuts.