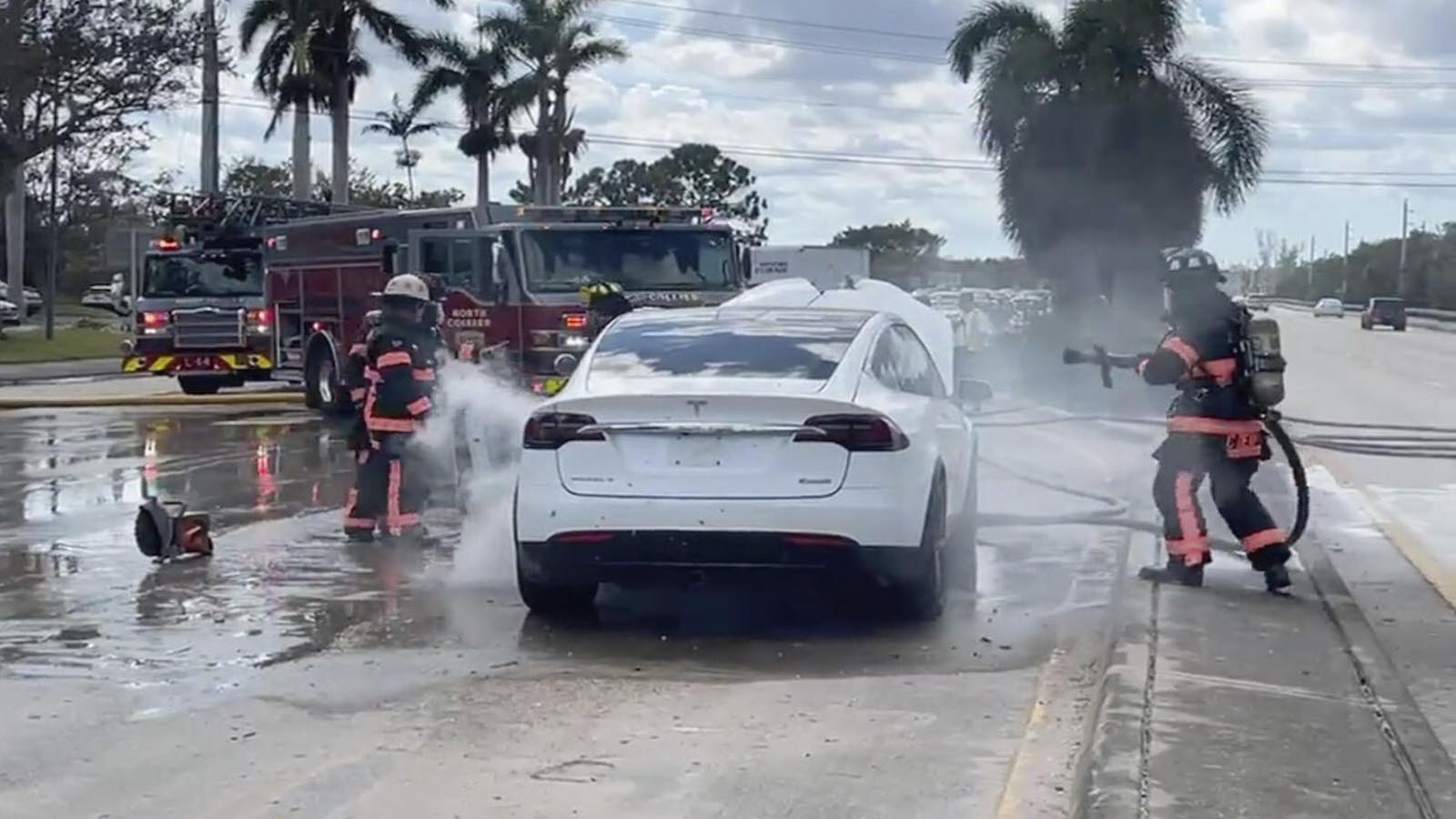 EV batteries that have been waterlogged in the wake of the hurricane are at risk of corrosion, which could lead to unexpected fires, according to Jimmy Patronis, the state’s top financial officer and fire marshal.

“There’s a ton of EVs disabled from Ian. As those batteries corrode, fires start,” Patronis tweeted Thursday. “That’s a new challenge that our firefighters haven’t faced before. At least on this kind of scale.”

“It takes special training and understanding of EVs to ensure these fires are put out quickly and safely,” he continued in a follow-up tweet. “Thanks to [North Collier Fire Rescue] for their hard work.”

There’s a ton of EVs disabled from Ian. As those batteries corrode, fires start. That’s a new challenge that our firefighters haven’t faced before. At least on this kind of scale. #HurricaneIan pic.twitter.com/WsErgA6evO

Patronis published a video of firefighters in Naples, Florida, battling a fire started from a Tesla EV’s battery. A bystander is overheard in the video saying that the crew had used hundreds of gallons of water attempting to put the fire out.

Last week, Hurricane Ian pummeled cities along Florida’s west coast including Naples and Fort Myers, making landfall as a Category 4 storm. The hurricane caused more than 100 deaths and over a million residents to lose power.

It is unclear how many EVs were impacted or destroyed by the storm.

Meanwhile, consumers are increasingly turning to EVs as the Biden administration continues to push a green transition involving zero-emission cars. Between April and June, EVs accounted for 5.6% of new car purchases in the U.S., up slightly from the first three months of 2022, according to Kelley Blue Book.

Shortly after taking office, President Biden announced a goal of ensuring that 50% of new car sales would be EVs by 2030.

The Biden administration has also taken a number of steps to incentivize Americans to shift to EVs. The president signed the Inflation Reduction Act, a bill that included a provision that awards Americans a tax credit worth $7,500 per EV purchase, into law in August, and the Department of Transportation has worked to create a federal EV highway charging network.

However, critics have blasted the administration for giving a “false impression” about EVs, noting that they are expensive and often unreliable.

“[The EV push] is really kind of a con job,” Myron Ebell, the director of the Competitive Enterprise Institute’s Center for Energy and Environment, told FOX Business in July. “It may be a good deal for some people in some places under some circumstances. But by-and-large right now, it’s not a good deal.”