It is unclear which justices were moved to safe locations. 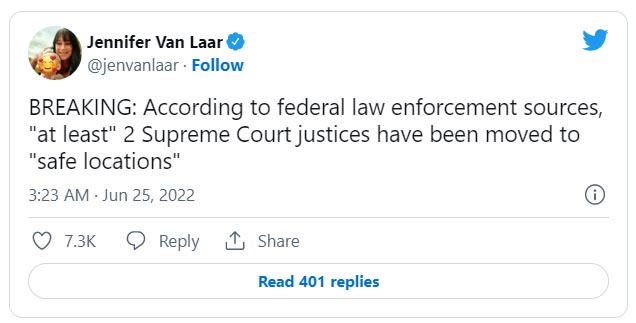 Earlier Friday pro-abortion activists were filmed handing out the home address of Justice Clarence Thomas to outraged protesters outside the Supreme Court.

The protesters were carrying signs with messages such as “ABORT SCOTUS.”

Justice Brett Kavanaugh already had a foiled assassination attempt at his home after abortion activists posted all of the conservative justice’s addresses online.

Thousands of screeching demons gathered in front of the Supreme Court on Friday chanting, “F*ck this court!”

HAPPENING NOW: Thousands of Pro Abortion Protesters pack the street in front of the Supreme Court and chant “F*CK THIS COURT” here in DC | @TPUSA pic.twitter.com/sdBTkIBid4

BREAKING: ANTIFA lights an American flag on fire here in DC in the middle of the street | @TPUSA pic.twitter.com/kJCvj8Rom9