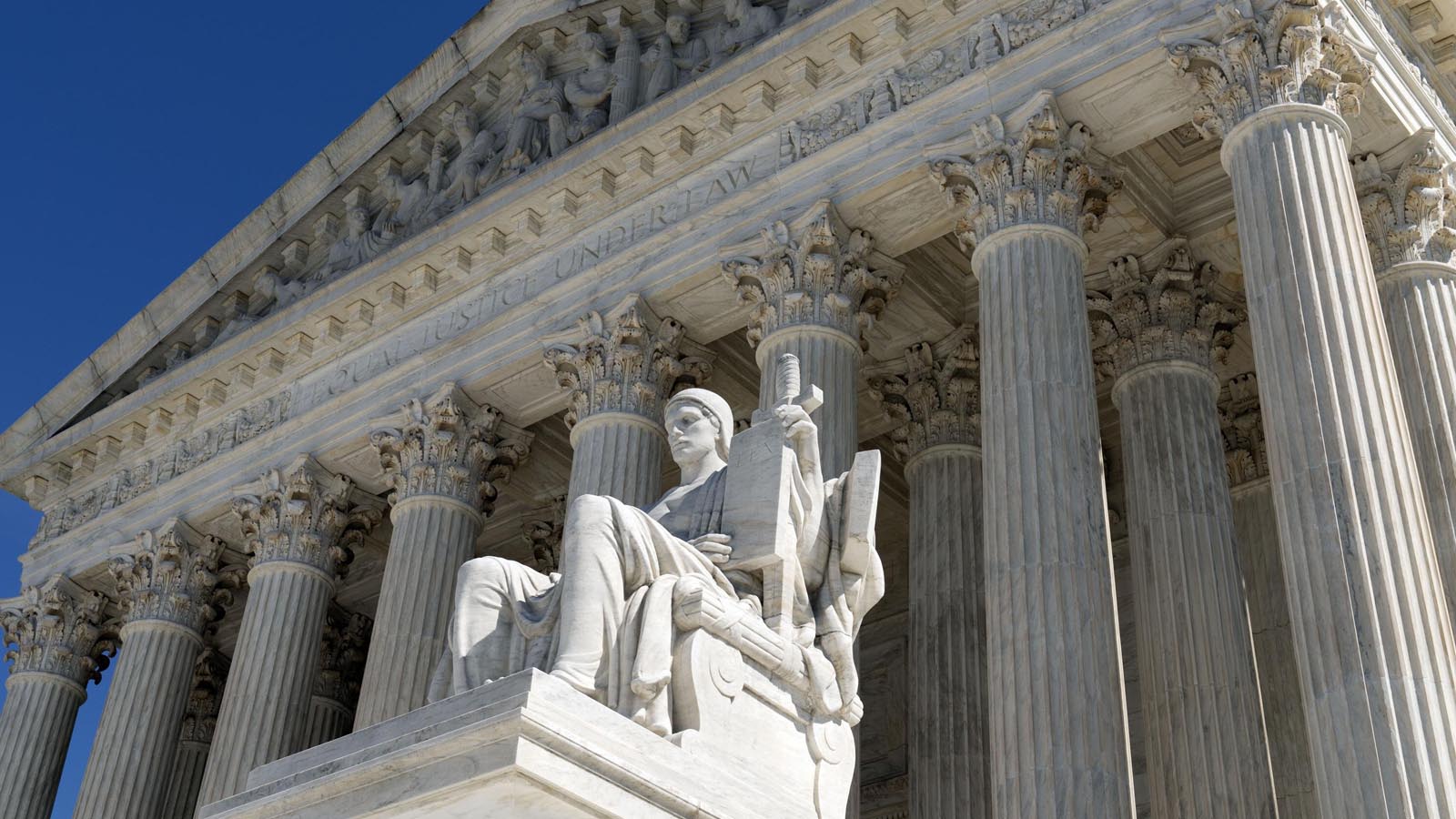 Monday, the US Supreme Court held five hours of arguments over the fate of “affirmative action” in higher education admissions. At the end of the marathon session, it seemed apparent that either affirmative action is dead, or at least it will be “pining for the fjords” when this decision is handed down around June 2023.

At issue are two cases where universities use racial preferences to manage the melanin level of their student body (Supreme Court Adds Two New Education Affirmative Action Cases to its Docket and the Left Cries ‘Armageddon’). The University of North Carolina-Chapel Hill is a state university that uses race in its admission process. Students for Fair Admissions, SFFA, sued in 2014 and lost the case before an Obama judge who ruled that UNC only used the tip used race minimally and had damned good reasons for doing so. Harvard is a private university that also uses race to manage who gets in. The issue, in this case, is that Harvard had a policy of actively discriminating against Asian applicants (Asian students sue Harvard for discrimination). 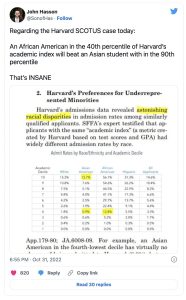 Harvard prevailed at trial on appeal to the First Circuit. SFFA bypassed bringing the UNC case to the Fourth Circuit and appealed directly to the Supreme Court.

When the Supreme Court accepted and combined the two cases, this is how the issues to be argued were framed:

(1) Whether the Supreme Court should overrule Grutter v. Bollinger and hold that institutions of higher education cannot use race as a factor in admissions;

(2) Whether a university can reject a race-neutral alternative because it would change the composition of the student body, without proving that the alternative would cause a dramatic sacrifice in academic quality or the educational benefits of overall student-body diversity, and

Just as in the Dobbs case, the fundamental issue before the Supreme Court is whether a previous precedent is still valid. In Dobbs, the precedents were Roe and Casey. Here the precedent is Grutter vs. Bollinger which ruled the Constitution “does not prohibit the law school’s narrowly tailored use of race in admissions decisions to further a compelling interest in obtaining the educational benefits that flow from a diverse student body.” The decision was a rather reluctant endorsement of the practice. Sandra Day O’Connor said that legalized racial discrimination couldn’t go on forever. “[R]ace-conscious admissions policies must be limited in time,” she wrote. “The Court takes the Law School at its word that it would like nothing better than to find a race-neutral admissions formula and will terminate its use of racial preferences as soon as practicable. The Court expects that 25 years from now, the use of racial preferences will no longer be necessary to further the interest approved today.”

Here are some of the comments that people will be talking about tomorrow.

Patrick Strawbridge, representing Students for Fair Admissions, said allowing the use of race in higher education was an outlier among the court’s decisions that should be rejected.
“Whatever factors the government may use in deciding which jurors to sit, who you may marry, or which primary schools our children can attend, skin color is not one of them,” he said

“I’ve heard the word diversity quite a few times, and I don’t have a clue what it means,” Thomas said to North Carolina Solicitor General Ryan Y. Park.

When Park tried to explain the educational benefits of diversity, Thomas, who is the second Black justice to sit on the court, replied that he didn’t “put much stock in that because I’ve heard similar arguments in favor of segregation too.”

After repeated questions, lawyer Seth Waxman conceded that being African American or Hispanic — or in some cases Asian American — can tip the scales in favor of admission for highly qualified applicants.

Roberts quickly shot back: “We did not fight a civil war about oboe players. We did fight a civil war to eliminate racial discrimination,” he said. “And that’s why it’s a matter of considerable concern. I think it’s important for you to establish whether or not granting a credit based solely on skin color is based on a stereotype when you say this brings diversity of viewpoint. It may not bring diversity of viewpoint in a particular case at all.”

“What if it continues to be difficult in another 25 years” to create a diverse student body, Justice Amy Coney Barrett asked Park. “So what are you saying when you’re up here in 2040? Are you still defending it like this is just indefinite? It’s going to keep going on?”

Alito pressed Waxman on a “personal score,” which is assigned to prospective Harvard students during the admissions process and often ranks Asian students lower than those from other races. But Waxman didn’t answer Alito’s questions directly, leading Alito to get agitated with the lawyer.

“You refer to the personal score. And that’s a score that Harvard gives based on character traits such as integrity, courage, kindness and empathy. But the record shows that Asian student applicants get the lowest personal scores of any other group,” Alito said. “What accounts for that?

“It has to be one of two things,” Alito continued. “It has to be that they really do lack integrity, courage, kindness and empathy to the same degree as students of other races. Or there has to be something wrong with this personal score.”

The lawyers representing the University of North Carolina and Harvard faced a tough, uphill slog. Like this exchange between Justice Samuel Alito and North Carolina Solicitor General Ryan Park.

JUSTICE ALITO: Let me just ask one more related question, and that is the circumstance — and this is a real problem, and I’ve heard it described to me by people who face it, when can a student honestly claim to fall within one of these groups that is awarded a plus factor?

So let’s say the student has one grandparent who falls within that class. Can the student claim to be a member of an underrepresented minority?

PARK: If that person believes that that is the accurate expression of their identity, I don’t think there would be any –

JUSTICE ALITO: –great-great grandparent? Are you going to make me continue to go on?

Alito is right. Self-identification is a well-known grift. It is estimated that over a third of White college applicants lie about their race, bolstering the number of “Native American” college students far above what would be expected (Critical Race Theory Guru Ibram X. Kendi Pushes a Survey That Demolishes His Grift Then Reconsiders But Not Fast Enough).

Sotomayor, who referred to herself as an “affirmative action baby,” was as dense as usual.

“Congress spent a lot of money in trying to get black children, whether they were children of slaves or free[d] slaves, to be educated in integrated schools” because the framers “had a belief . . . that integration itself provided a value?”

Except none of this is true. The drafters of the Thirteenth and Fourteenth Amendments may have had a personal preference for integrated schools, but the history of the nation shows that the nation did not embrace integrated schools. On the eve of Brown vs. Board of Education, only 17 states forbid school segregation.

The US Solicitor General tried to create a carve-out for the military academies because of the essentiality of racial bean counting to national security. Most officers are commissioned via ROTC, and the career boost of a service academy commission has long since vanished; the argument is specious at best.

You can’t make firm predictions about decisions based on oral arguments. In this case, however, the governing precedent visualized affirmative action in admissions going away. Chief Justice Roberts, arguably the least reliable vote in the conservative bloc, has written against racial preferences in very unambiguous terms. The conservative majority didn’t seem interested in hearing anything from the UNC and Harvard lawyers but “when will racial preferences end?” And they couldn’t get an answer. Next summer I think they will give one.