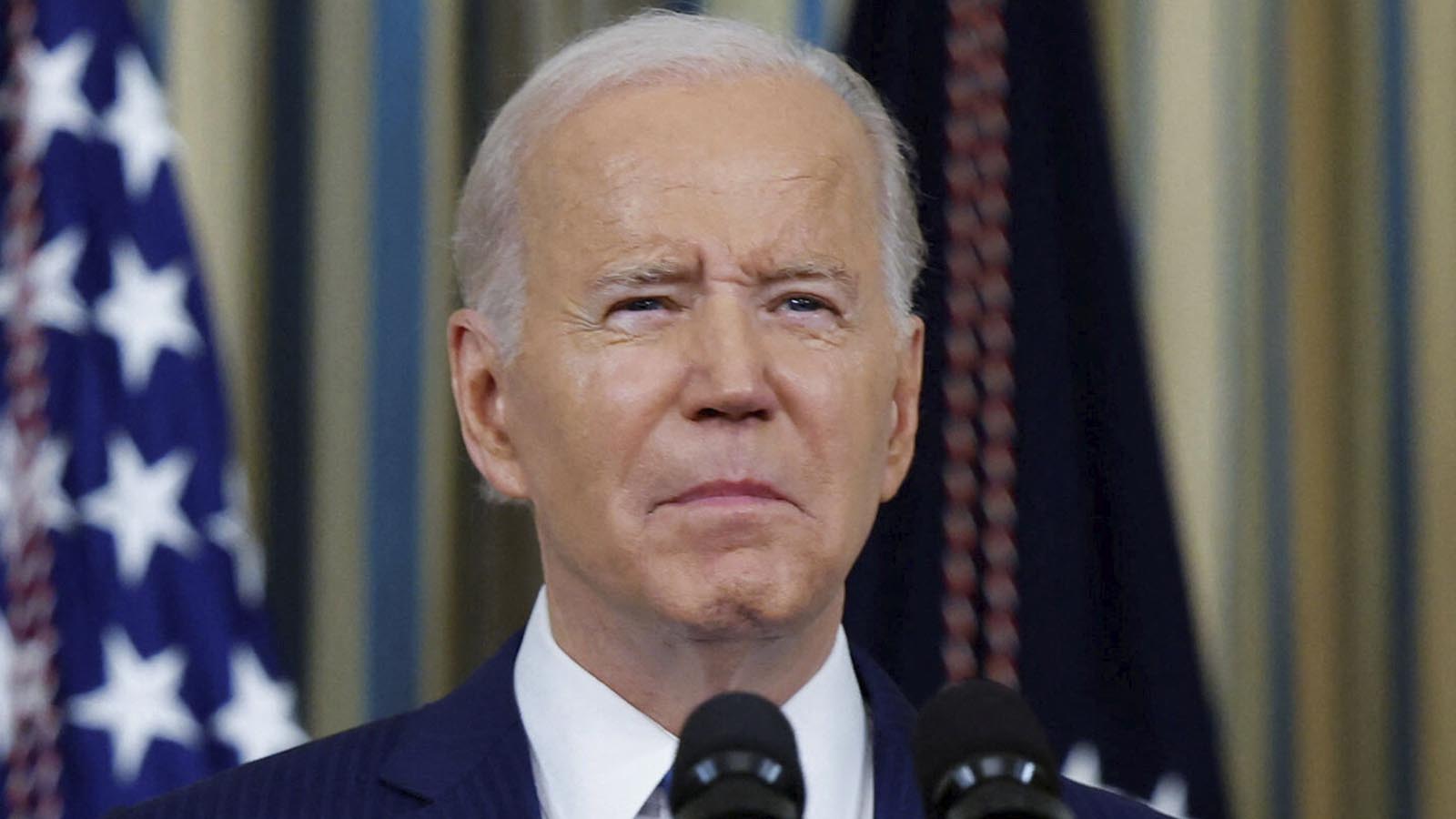 As 2022 and President Biden’s first full calendar year in office comes to an end, the White House has been trying to frame his year as one of significant accomplishments and lots of “building back better.” But Americans — dealing with negative wage growth of more than three percent, struggling to make ends meet while living paycheck-to-paycheck, staring down a crime crisis in their neighborhoods, and watching fentanyl ravage their communities — know the opposite to be true.

While all administrations seek to spin current events to favor their agenda and narrative, Biden’s has taken the effort into full-blown falsehood territory, often requiring Americans to ignore the reality they see in order to believe what the president and his West Wing are claiming.

In no particular order, here are seven of President Biden’s biggest or most unforgivable whoppers of 2022.

1. “The economy is strong as hell”

Despite President Biden’s approval on the economy being 20 points underwater at the time he claimed there’s “nothing to see here” when it comes to the U.S. economy, this one is as literally unbelievable as one can get.

2. I “signed a law” to cancel student loan debt that passed “by a vote or two”

Where to begin? First, the president’s announcement about student loan debt was one of the most transparent attempts to mobilize young Democrat voters ahead of a midterm cycle in years. “How do you do fellow kids? How about I take your student debt burden and pass it on to taxpayers who chose not to take on six-figure debts in order to get useless degrees?”

BIDEN: I “signed a law” to cancel student loan debt and “got it passed by a vote or two.” pic.twitter.com/AWKTlCjfeI

Second, despite Biden’s claim, his student loan bailout was an executive order — not a bill passed by Americans’ elected representatives. Biden’s complicated lie even included a phony vote margin which raises even more questions about Biden’s ability to know what’s going on around him.

Lastly, Biden’s student debt plan that sought to get young people out to the polls in the midterms to vote for Democrats — with a simple bribe of essentially “free” money that just meant all Americans would share the burden of student debt — predictably did not pan out. Those who turned out to vote because Biden promised to bail them out are now the suckers looking at their unchanged debt balances.

As usual, President Biden refuses to back down from lies even when clear evidence contradicts his claims, typified by his false smears of Georgia’s election integrity law. Despite Biden’s frequent attempts to say the legislation was little more than an attempt at racist disenfranchisement, it’s just never been true.

“How many times do we have to tell you this old man?!” The midterm cycle in Georgia — both the primaries, general election, and runoff — saw turnout beating cycle and single-day participation numbers seen in 2018 and 2020. Voters were not disenfranchised by Georgia’s law. Instead, more Georgians voted in the 2022 midterms than in the previous midterm cycle. Could it be that voters are more energized to participate when they know their vote will count and not be potentially canceled out by fraudulent ballots? Still, Biden won’t admit he was wrong and kept up his lies through 2022 — the same ones that saw him successfully urge Major League Baseball to yank the All-Star Game from Atlanta previously — that Georgia was a bastion of racist voter suppression.

4. “No national plan to get Americans vaccinated”

In yet another literally unbelievable lie from President Biden, he claimed this year that when he was sworn into office, “there was no national plan to get Americans vaccinated and jump-start our economy.” *Sigh.* Biden, certainly, cannot believe this — or else his mind is in worse shape than we thought.

Both Biden and VP Harris received vaccines before they were sworn into office. They got their vaccines because of Operation Warp Speed that the Trump administration launched to create a war effort-level mobilization of federal public and private resources to manufacture and distribute vaccines.

When Vice President @KamalaHarris and I took office, there was no national plan to get Americans vaccinated and jump-start our economy.

The American Rescue Plan helped us get 500 million shots in arms and set off the greatest single year of job growth in our history.

What’s more, if Biden thinks his plan to “jump-start” the economy is some sort of brilliant plan, he’s well and truly lost it. The economy has not been jump-started. The economy is, not to beleaguer the point, not doing well and even entered a technical recession this year even as the Federal Reserve has had to increase interest rates at the most aggressive pace in years to the highest level since 2008.

In another of Biden’s favorite lies, he continued to attack the Second Amendment and law-abiding firearm owners this year. In addition to claiming no constitutional right is “absolute,” Biden often quips that “you couldn’t buy a cannon when this [Second] Amendment was passed.” In addition to being a silly argument, it’s false.

BIDEN: "This doesn't doesn't violate anybody's Second Amendment right…You couldn't buy a cannon when this amendment was passed. There's no reason why you shouldn't be able to buy certain assault weapons." pic.twitter.com/M7hoVi84UQ

Biden’s claim about cannon ownership received “Four Pinocchios” from The Washington Post last June, but Biden continues to repeat the lie year after year. He knows better, but just wants to scare Americans and demonize those who lawfully own firearms to protect themselves, their property, and their families amid rising crime that continues to go unpunished thanks to DAs in Biden’s party.

What is it with Biden making up stories about what he used to do before and earlier in his political career? Throughout 2022, Americans learned all kinds of new information about what Biden has done in his 80 years of life. Most of what he said this year, however, has been dubious and unconfirmed at best and outright lies at worst:

Biden claimed he was appointed to the U.S. Naval Academy in 1965 — but that’s the year he graduated from the University of Delaware.
Biden claimed he “really enjoyed teaching” at the University of Pennsylvania — but he never taught a class there.
Biden claimed “a significant portion” of his house burned down in 2004 “with my wife in it” — but it was a small, contained kitchen fire.
And those are just a few of Biden’s dubious yarns and claims that he’s used to either pander to his audience or try to deny reality to make himself look better.

Yet another unbelievable lie from Biden and others in his administration is that the U.S.-Mexico border is “closed,” “secure,” or “under control.” If you have eyes or ears and aren’t in a coma, you know this simply isn’t true.

Townhall has covered Biden’s open-border crisis extensively, both from DC and along the border itself:

The Biden administration insists the border is secure. Townhall has seen firsthand it's not.

If Biden will make a claim as brazen as this, nearly every other claim he makes about his work and the condition of the country is called into question.

Ironically and quite hypocritically, Biden has insisted that so-called misinformation and disinformation are major threats to our “democracy” while he continues to peddle claims that are untrue and intended to mislead Americans in order to make himself and his administration look better. But that’s Biden, and that’s what he gets to do because he has plenty of cover from mainstream media outlets and his fellow Democrats.