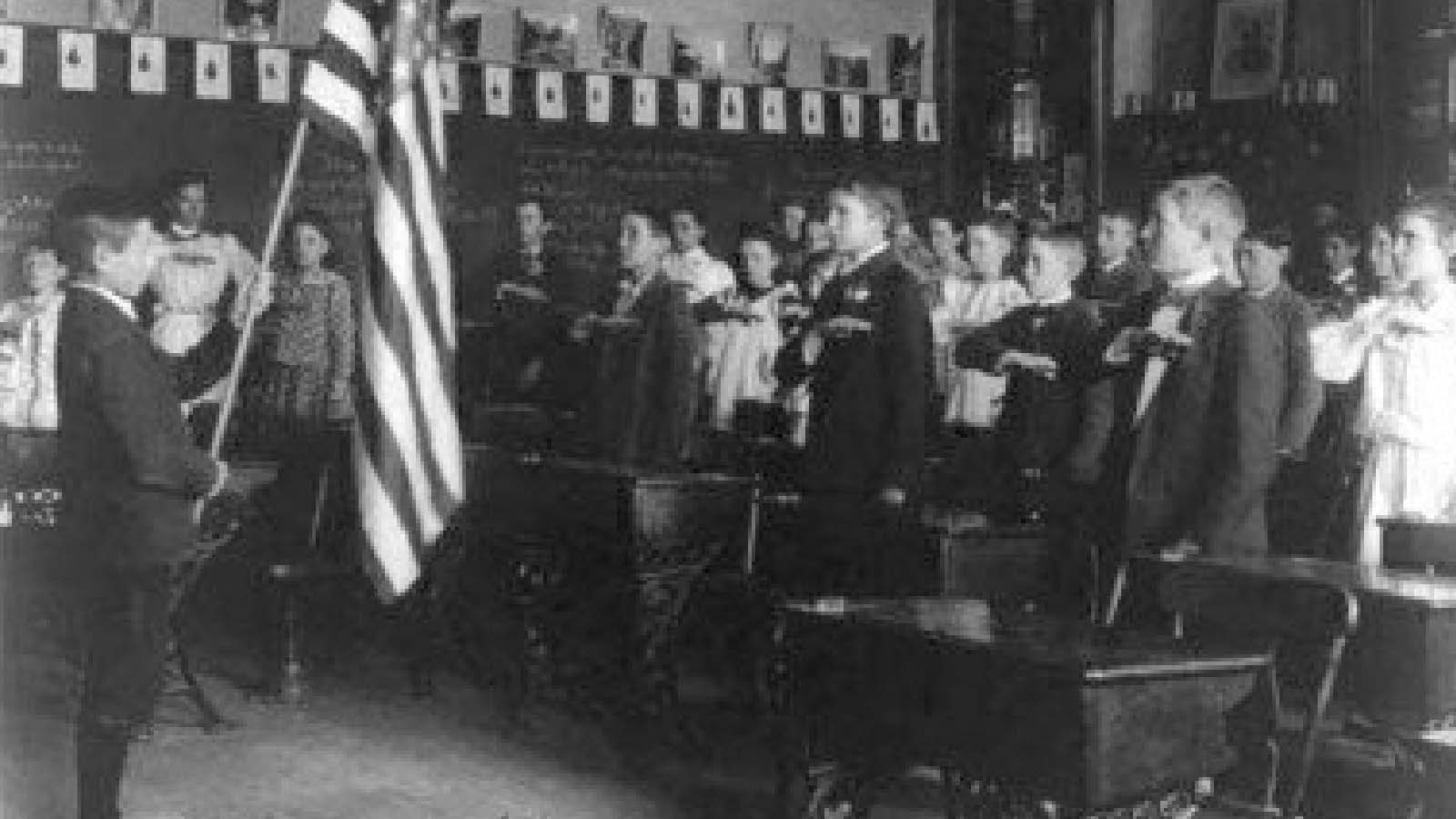 The Pledge of Allegiance to the United States’ flag has been part of American life for generations, but not without some constitutional controversy.

The pledge has existed in some form since September 1892 when it appeared in a magazine article that commemorated the 400th anniversary of Christopher Columbus’s arrival in the New World.

Francis Bellamy, an ordained minister, created a pledge that would be taken on Columbus Day by millions of school children. His version did not mention the words “under God”:

“I pledge allegiance to my flag and the Republic for which it stands—one Nation indivisible—with liberty and justice for all.”

Bellamy added an extra word, “to,” before “the Republic,” but other school officials modified the pledge over the years. Two historical groups added “to the flag of the United States of America.”

In 1942, President Franklin D. Roosevelt signed a “Flag Code” law passed by Congress that established rules for the display and care of the flag and included the Pledge.

The Supreme Court then took the unusual step of ruling against the Jehovah’s Witnesses in a legal fight against the Pledge and reversing its own ruling within three years.

First in 1940 in the case of Minersville School District v. Gobitis, the Court held that a public school could force students who were Jehovah’s Witnesses to salute the flag and say the Pledge. Justice Felix Frankfurter wrote in the majority opinion that “conscientious scruples have not, in the course of the long struggle for religious toleration, relieved the individual from obedience to a general law not aimed at the promotion or restriction of religious beliefs.”

However, in 1943, the Court changed its course in West Virginia State Board of Education v. Barnette, where the majority reversed the Gobitis decision and held that “the Free Speech clause of the First Amendment prohibits public schools from forcing students to salute the American flag and say the Pledge of Allegiance.”

“If there is any fixed star in our constitutional constellation, it is that no official, high or petty, can prescribe what shall be orthodox in politics, nationalism, religion, or other matters of opinion or force citizens to confess by word or act their faith therein. If there are any circumstances which permit an exception, they do not now occur to us,” said Justice Robert Jackson in his opinion.

Justice Frankfurter wrote in his dissent that, “The very purpose of a Bill of Rights was to withdraw certain subjects from the vicissitudes of political controversy, to place them beyond the reach of majorities and officials and to establish them as legal principles to be applied by the courts.”

Over the following decades, there have been legal challenges concerning the use of those two words in the Pledge.

Most notably, in 2004 the Supreme Court ruled in a case brought by an atheist who said a California school’s pledge requirement violated his daughter’s rights under the First Amendment’s Establishment and Free Exercise Clauses. In Elk Grove Unified School District v. Newdow , the Supreme Court did not end up ruling on the legality of the words “under God” in relation to the First Amendment. Instead, Justice John Paul Stevens said Newdow didn’t have standing to bring suit because he lacked sufficient custody over his daughter.

But Chief Justice William Rehnquist and Justices Sandra Day O’Connor and Clarence Thomas wrote separate concurrences, stating that requiring teachers to lead the Pledge, despite the inclusion of the phrase, “under God,” was constitutional.

A similar challenge to the Pledge was denied by two federal appeals courts in 2010, which ruled “that the Pledge of Allegiance does not violate the Establishment Clause because Congress’ ostensible and predominant purpose was to inspire patriotism” and “both the choice to engage in the recitation of the Pledge and the choice not to do so are entirely voluntary.”

Two recent legal challenges also targeted state constitutions, and not the U.S. Constitution, for guidance about using the words “under God.”

In 2014, the Massachusetts case Jane Doe v. Acton-Boxborough Regional School District involved a group of parents, teachers and the American Humanist Association in an action against a school district. The group claimed the Pledge requirement, including the use of the words “under God,” violated the equal protection clause of the state’s constitution. The state Supreme Court didn’t agree.

Also in 2014, a New Jersey family and the American Humanist Association filed a similar lawsuit against the Matawan-Aberdeen Regional School District, seeking to eliminate the use of the words “under God” from Pledges taken at public schools. The school district said that it was just following a New Jersey state law that requires schools to have a daily recitation of the Pledge, and that individual students weren’t forced to take part. In February 2015, a judge ruled in favor of the school district.

An event in 2019 drew attention to the ability of states to require students at public schools to get parental permission before opting out of the pledge, when a sixth-grade student was arrested in a pledge dispute. That case was dropped in March 2019, but the incident harkened back to Frazier v. Winn, a 2008 lower court decision that the U.S. Supreme Court did not take on appeal.

In that case, the 11th Circuit Appeals Court upheld Florida’s statute requiring parental permission as constitutional. “Although we accept that the government ordinarily may not compel students to participate in the Pledge, e.g., Barnette, we also recognize that a parent’s right to interfere with the wishes of his child is stronger than a public school official’s right to interfere on behalf of the school’s own interest,” the federal court said. “Most important, the statute ultimately leaves it to the parent whether a schoolchild will pledge or not.”