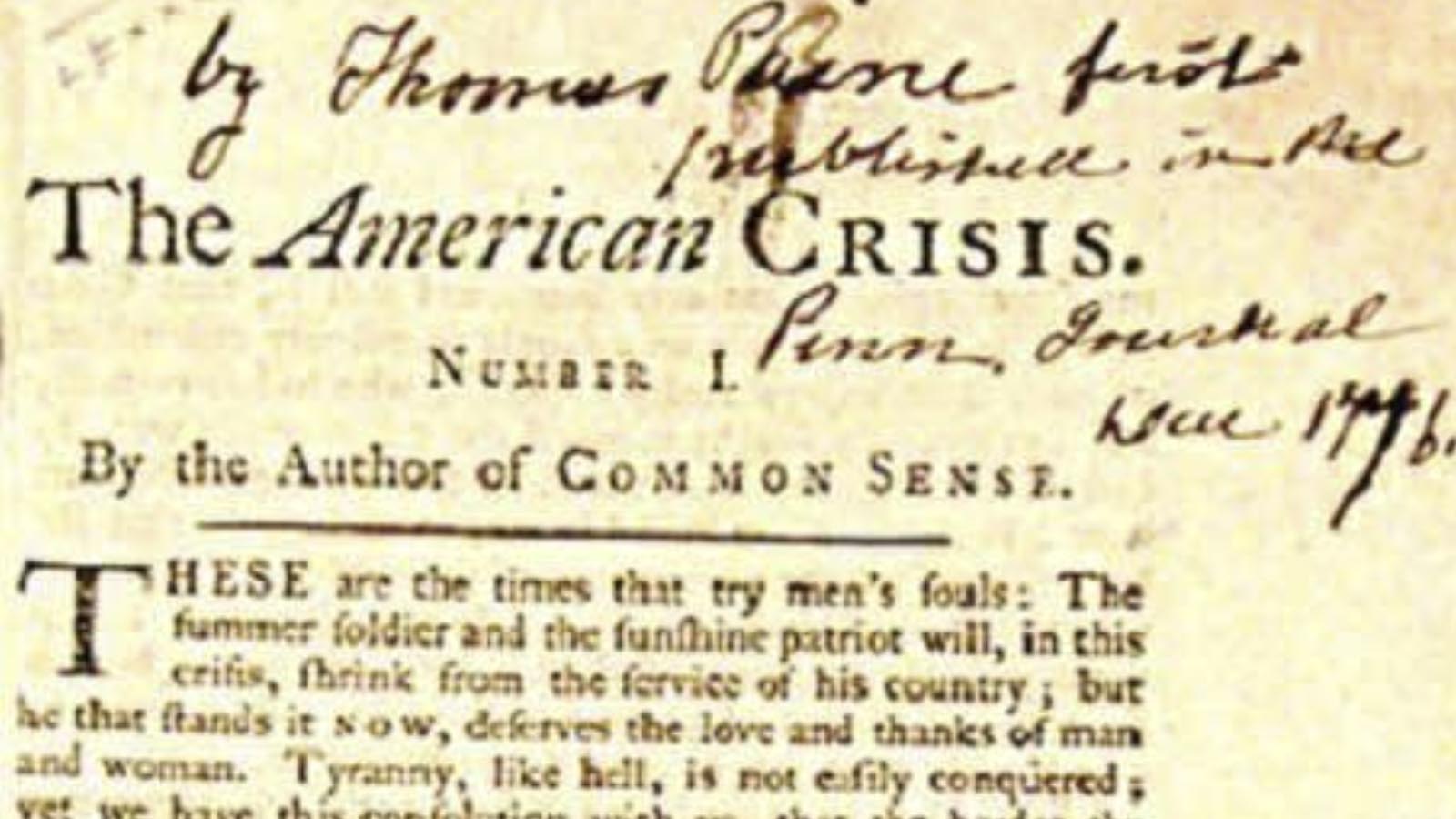 The publication of Thomas Paine’s Common Sense caused a sensation in early 1776 as it explained the need for freedom. But it was a second series of pamphlets published on December 19 of that year that inspired a huge American military victory.

“These are the times that try men’s souls: The summer soldier and the sunshine patriot will, in this crisis, shrink from the service of their country; but he that stands it now, deserves the love and thanks of man and woman. Tyranny, like Hell, is not easily conquered; yet we have this consolation with us, that the harder the conflict, the more glorious the triumph,” said Paine in The American Crisis, a new pamphlet that appeared in the Pennsylvania Journal.

Four days later, like a modern-day football coach seeking to inspire his team, General George Washington had Paine’s words read out loud to his troops at McConkey’s Ferry on the Delaware River. Paine had written the words during the army’s retreat from New York.

The army’s commanders read the words to a force that include John Marshall, Alexander Hamilton, James Monroe, and Aaron Burr.

Washington was literally at a crossroads. His opponent, General Howe, had offered pardons to local residents, and the re-enlistment period was ending for the volunteers in his army.

An inspired Washington and his troops, who adopted the motto “Victory or Death,” crossed the Delaware River during a Nor’easter on Christmas Day and routed the Hessian garrison at Trenton.

The much-needed victory galvanized the Revolutionary forces and the Continental Congress. Troops decided to re-enlist as Washington’s forces won a second battle at Trenton and a key engagement at Princeton.

While The American Crisis did much to inspire the troops, its fame was nowhere near that of Common Sense, which was essentially the first viral mass communications event in America.

The first version of Common Sense went viral, in the current sense of the word, when it hit the cobblestone streets of Philadelphia on January 9, 1776.

Common Sense sold 120,000 copies in its first three months, and by the end of the Revolution, 500,000 copies were sold. The estimated population of the Colonies (excluding its African-American and Native American populations) was 2.5 million.

So, about 20 percent of colonists owned a copy of the revolutionary booklet. In current-day sales, that would amount to sales of 60 million, not including overseas sales.

In the case of Common Sense, the publicity was literally word of mouth, since people would buy the pamphlet and shout the words on street corners and inside taverns for the illiterate to hear.

Paine was born and raised in England, and he had been in Philadelphia for little more than a year, after getting a letter of recommendation from Benjamin Franklin.

He published Common Sense anonymously, and its simple words made the case for the Colonies’ separation from England, in no uncertain terms.

In his later years, Paine would become a controversial figure because of his writings on religion and his role in the French Revolution; only a handful of people attended his funeral in 1809.

President Thomas Jefferson had permitted Paine to return from France in his final years and wrote about the author in 1821:

“No writer has exceeded Paine in ease and familiarity of style, in perspicuity of expression, happiness of elucidation, and in simple and unassuming language,” Jefferson said. “In this he may be compared with Dr. Franklin; and indeed his Common Sense was, for a while, believed to have been written by Dr. Franklin, and published under the borrowed name of Paine, who had come over with him from England.”